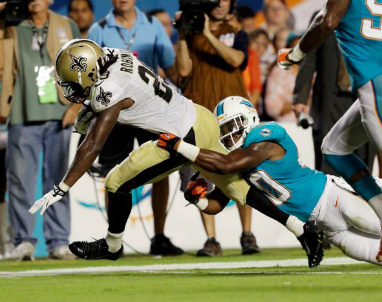 MIAMI GARDENS, Fla. (AP) — Drew Brees wore a uniform — and even eye black — but never played. Ryan Tannehill also watched from the sideline, laughing at the Kiss Cam when it showed during a timeout on the scoreboard video screen.

The final preseason game for the Saints and Dolphins was for reserves, and Miami third-string quarterback Pat Devlin led his team to a 24-21 victory Thursday night.

Devlin threw for 259 yards, including a 56-yard pass to Marvin McNutt on fourth-and-4 with 3:02 left for the winning score.

Many of the players who took part will be out of work by Saturday, when teams must reach their 53-man roster limit. The fans knew it, which is why the stadium was two-thirds empty.

The Saints (3-1) open the season Sept. 8 against Atlanta. The Dolphins (2-3) open at Cleveland the same day.