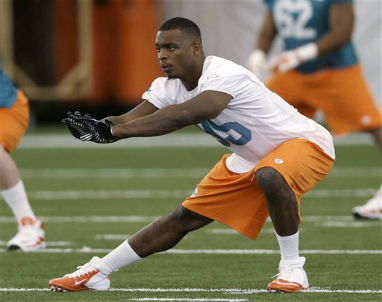 DAVIE, Fla. (AP) — Miami Dolphins rookie linebacker Dion Jordan has returned to practice after being sidelined by a lingering shoulder injury, improving his chances of playing in the season opener next week.

Jordan, the No. 3 overall pick in the draft, suffered a setback this month in his recovery from right shoulder surgery last winter. He has missed the past two exhibition games and most of practice the last two weeks.

Coach Joe Philbin declined to say how limited Jordan was in practice Tuesday but gave the rookie a favorable review.

Jordan might return for the season opener Sept. 8 at Cleveland, although last week the former Oregon star said he wouldn’t be surprised if he missed that game. He underwent surgery Feb. 28 for a torn labrum.