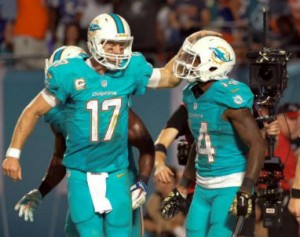 By many Dolphin fans, the game this week with the Denver Broncos is viewed at with fear and an “L” already marked on the schedule (especially looking at the schedule before the season). The Broncos of course are still a very dangerous team and will be one of the toughest challenges Miami faces all season, especially on the road. However, the Broncos’ loss to St. Louis this week made the game more interesting to predict.

As a Dolphins fan, my first reaction was that this wasn’t good. A dangerous offensive team that only scored seven points (by far their fewest point total this season) and could be incredibly motivated and focused to put as many points on the board as possible. The Dolphins have been playing very well on both sides of the ball, but are still teetering on whether or not they are for real or not – a possible meltdown against the Broncos could ruin the contention thought for them nationally and set us back in the ridiculously crowded AFC playoff picture.

On the other hand, maybe the St. Louis loss sparked something the Dolphins could use in preparation. After all, the Broncos have not been playing particularly well losing two of their last three games (both losses by double digits) and their only win was against a then winless Raiders.

Truly the Dolphins have not gotten the credit they deserve anyway. Miami is second in the NFL in total defense and passing yards allowed, plus eighth in rushing yards against. In their last seven games they are 5-2, with both losses being one play away from wins (Green Bay and Detroit). In those seven games, Ryan Tannehill has posted a quarterback rating of at least 109 four times. Overall the offense has been clicking with their rushing attacked ranked sixth in the entire league.

Dolphin fans should be cautiously optimistic about this matchup, but not be happy with a close loss that would be a serviceable result for most Dolphins teams of the past ten years. This is team is consistently looking different.