DAVIE — Kenyan Drake has the ability to impact the game from multiple spots on the field. In the NFL, generating mismatches is paramount to an offense’s success, and Drake has the potential to become a matchup nightmare in the NFL. As a result of his versatility, Drake was not surprised when he became the third running back taken in the 2016 NFL draft. 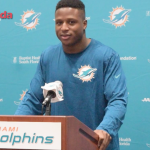 “Of course [I expected it],” Drake said. “I feel like in general, with my skill-set in my eyes, it will allow me to be the best back in the draft and I want to continue to prove that through my NFL career.”

Despite his lofty expectations for himself, Drake feels no pressure; he simply wants to do his job and let his play speak for itself.

“I’m just coming here to help the team win in any way possible,” Drake said. “I’m just focused on rookie mini camp right now, OTAs, going into camp and letting the chips fall where they may at that time. But I’m going to work hard to be the best player I can be and help the team win a championship.”

Drake is coming from a storied program at the University of Alabama and he feels as though his time there will absolutely help him in his quest to being a quality player in the NFL. When asked how his time at Alabama will benefit him in the NFL, Drake said, “I just felt like practicing against the best players in the country on a daily basis will give me an edge in any regard that’s first and foremost.

“The process of being in a pro-style offense, I come in with a good understanding of not necessarily the terminology because terminology will be different, but every basic pro-style offense is going to be the same. So that gives me an edge over whoever else who didn’t have that opportunity. At the same time just going to Alabama and being under that winning culture, I expect nothing less out of my teammates and out of myself and that’s why I’m going to come here and help this team win a Super Bowl in any way possible.”

While at Alabama, Drake suffered a broken leg as well as a broken arm, but he rebounded from those injuries and was a integral part of Alabama’s national championship run. When asked about how his body feels Drake said, “We haven’t played a down of football since January, so anyone in their right mind would feel fresh regardless. I just want to come in and help this team win in any way possible.”

Drake wants to help his team win in any way possible and his versatility is what will enable him to contribute to his team’s success. He knows he can be an every down back, but he prides himself on being able to create mismatches against linebackers and safeties when lined up as a wide receiver as well.

Dolphins head coach Adam Gase loves the fact that Drake can generate mismatches on offense, but his ability to play special teams is equally important in Gase’s eyes.

“I think a lot of positions you look at, the more you can do the better, Gase said. “You only have so many spots on game day. When you have a guy like him that’s done so much. …Getting a guy that was in a program like Nick Saban’s program, and being with Nick for as long as I was, you just know, you’re playing special teams.

“It doesn’t matter how many snaps on offense or defense you play, you’re a backup and you’re going to play special teams. At this level, there’s a handful of guys that don’t play special teams, so you better be able to role in here and contribute in that area.”

Drake might not have been the feature back at Alabama, but he felt as though NFL scouts and general managers would notice him if he played to the best of his ability each time his number was called at Alabama.

When asked if he was worried about his draft stock falling because he was a part-time player Drake said, “Of course not, because at the end of the day, GMs and everybody look at specific abilities. Just because you didn’t get to play doesn’t mean that you aren’t a great player and obviously the Dolphins proved that by drafting me.”