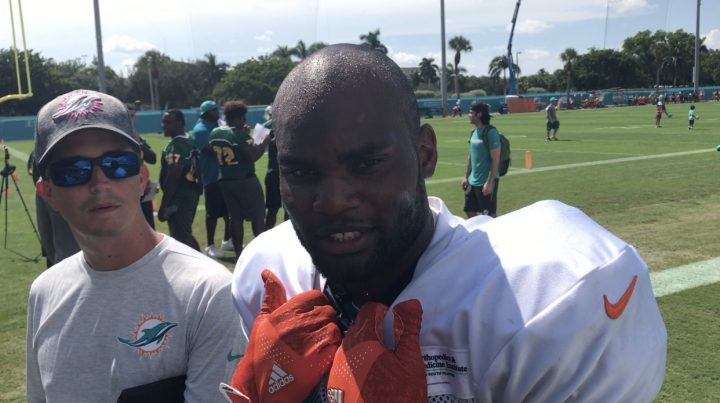 Leonte Carroo finished his rookie campaign with a meager three receptions for 29 yards and one touchdown. While his production fell well short of his own expectations last season, he’s looking to have a bounce-back season in his second year in the NFL.

“Yes, I would say it (last season) was a disappointment as far as the expectations that I had for myself and that these guys had for me,” Carroo said. “This year, I’m just looking to go out and make plays (and) make way more plays than I did last year. (I just want to) go out there and do whatever I can for my teammates – special teams, offensively – and just continue to have fun.”

One reason Carroo believes he’ll have a better season is because of the weight he lost in the offseason. Carroo began his NFL career at 221 pounds and is now down to 212. Since shedding 13 pounds, he’s noticed marked improvement in his stamina.

Carroo is looking to lose another four pounds to get down to 208, which he feels is ideal playing weight for the remainder of his career. Despite still having four pounds to go in order to reach his target weight, he’s already off to a very good start this training camp.

During Sunday’s practice, Carroo hauled in two passes that were hotly contested. The first catch was a near touchdown over Walt Aikens during one-on-one drills and the second was against Michael Thomas during team period.

Dolphins fans didn’t get to see Caroo’s entire skill set on display in his rookie season, but the two plays he made on Sunday serve as a reminder of just how strong his hands are, and why the Dolphins traded up to select him with pick No. 86 in the 2016 NFL draft.

Carroo might be attempting to lean out for the 2017 season, but coach Adam Gase still views him as a larger wide receiver and would like to continue seeing improvement in his releases off of the line of scrimmage.

“I think he’s done a really good job,” Gase said. “There were a couple of things that we wanted to kind of change with him with his releases and kind of how he was running some of his routes and some of the things that we wanted to emphasize. We started in the spring and then he came back to training camp and he was really sharp right out of the gate. It’s funny, we were just having a conversation about the way he is running off the ball.

“He wants to be consistent with that and stay with what he’s doing because the DBs are struggling putting their hands on him and then trying to stay with him because he’s physical. He’s a big man. The way that he’s kind of angling the DBs a little bit, he’s making it very, very tough on them and I think we’re just going to keep pushing that and trying to put him in the position to make some plays and just keep developing him.”

In Year 2, Carroo is much more comfortable with the playbook and isn’t thinking nearly as much as he was in his rookie year. He’s more focused on his craft and making plays than ever before.

While his weight loss journey is key to finding potential sustained success in the NFL he also continues to learn and draw inspiration from “The Big 3” (Jarvis Landry, DeVante Parker and Kenny Stills).

“That’s a big factor for me, to continue to lose more and more weight so I can become a more fluid, faster receiver. Also, just to learn from ‘The Big 3’ (Jarvis Landry, DeVante Parker and Kenny Stills) and learn from what they do every single day, and try to feed off of them and make plays myself so I can make my way into their little group.”