INDIANAPOLIS — Myles Jack will not participate in on-field drills at the National Scouting Combine in Indianapolis as he’s still awaiting to be cleared by doctors. However, he did sound confident that he would be cleared on 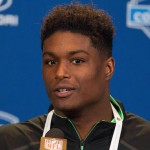 Despite not being able to participate in on-field drills, he’ll run the full gamut of auxiliary activities commonly associated with the NFL Combine experience. Jack has begun the process of interviewing with teams and has already undergone  a thorough medical exam.

Doctors were able to get a closer look at Jack’s repaired meniscus which ended his junior season at UCLA. While he fully anticipated having the knee evaluated at the Combine, he was rather taken aback by how physical doctors were with him.

Jack said, “They were pretty blunt and pretty up front as far as moving my knee and twisting it and, ‘Does that hurt?’ And everything but it was fine. My agent told me they were going to be really aggressive with it and kind of trying to make it hurt to see if it hurts exactly, but it was fine.”

Jack played all over the field during his time at UCLA. He played each of the linebacker positions, and he also contributed on offense at the running back position. Jack expressed his desire to stick to one position in the NFL but he refused to define himself, for himself.

Jack was rather vague when asked what positions he’d like to play at the next level telling reporters, “That’s the thing, I see myself as a football player. I kind of want the teams to decide for themselves. I feel like I can play any position.

Jack will give his future team a world of flexibility on defense as he’s capable of performing well at multiple spots. However, Jack highlighted the fact that a lot of teams are looking at him at MIKE linebacker. While the Miami Dolphins could certainly improve at all three linebacker positions, it’s important to have an instinctive middle linebacker who excels against the run and the pass. Jack has proven capable in both phases of the game and could very well be what the Dolphins are missing at the position.

Jack will do well as a MIKE linebacker in the NFL, and if he’s available at the No. 8 pick in the 2016 NFL draft, the Dolphins would greatly benefit from selecting him. The Dolphins struggles were evident with regards to gap integrity in the run game as well as covering tight ends down the seam during the 2015 season. Jack could certainly facilitate their efforts to rectify the aforementioned issues at MIKE linebacker.