Costly turnovers, missed field goals, and blown opportunities happen in nearly every football game at every level. However, when these blunders happen in the Super Bowl, they will live on in sports infamy for all eternity. Here is my list of top 5 biggest gaffes in Super Bowl history.


Jackie Smith enjoyed a Hall of Fame career as he compiled the most receiving yards by a tight end in NFL history at the time of his retirement (7,918). However, Smith will always be remembered for one pass that he couldn’t catch in the Super Bowl. Trailing 21-14 in the third quarter against the Pittsburgh Steelers, Dallas Cowboys’ quarterback Roger Staubach fired a third down pass to a wide open Smith in the middle of the end zone. The football hit a sliding Smith right in the chest and bounced away for an incomplete pass. Broadcaster Verne Lundquist then delivered the epic line that Jackie Smith “has got to be the sickest man in America”. As a result of Smith’s drop, the Cowboys had to settle for a field goal and went on to lose the game 35-31.


As a member of the Indianapolis Colts, future Hall of Famer Peyton Manning completed an impressive 31 of 45 passes for 333 yards and one touchdown against the New Orleans Saints in the Super Bowl. However, there was one throw in that game that Manning would love to forget. Trailing 24-17 with 3:24 remaining in the fourth quarter, Manning’s pass to receiver Reggie Wayne was off-target and found the open arms of Saints’ defensive back Tracy Porter. Porter dashed 74 yards to pay dirt, giving the Saints a 31-17 advantage and effectively ending any hope of an Indianapolis comeback. 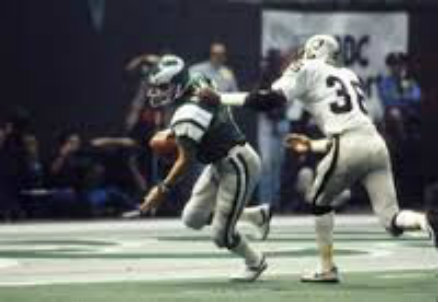 NFL analyst Ron Jaworski needs to look no further than his own dismal performance as to why his Philadelphia Eagles lost in the Super Bowl. Jaworski committed four turnovers by himself, including three interceptions thrown to one defender; Oakland Raiders’ linebacker Rod Martin. Jaworski’s ineptitude that day never gave Philadelphia a fighting chance in this game as the Eagles ended up losing 27-10. 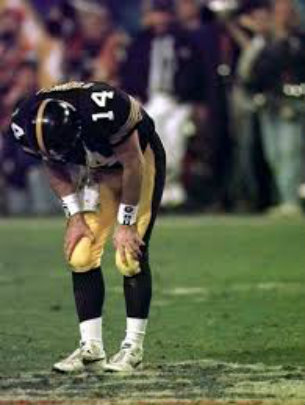 One would think that holding Cowboys’ Hall of Famers Emmitt Smith and Michael Irvin to 128 combined all-purpose yards would have given the Pittsburgh Steelers a great chance to win the Super Bowl. However, Pittsburgh’s excellent defensive efforts were completely wasted as Steelers’ quarterback Neil O’ Donnell threw three interceptions in the second half, including two errant passes to Cowboys’ defender Larry Brown. The most embarrassing part about both of O’ Donnell’s interceptions to Brown was the fact that there were no eligible receivers near either ball. The Cowboys won the Super Bowl and because of two gift interceptions and 77 total return yards, Brown was named Super Bowl MVP.

The Buffalo Bills of the 1990’s were known for their epic meltdowns on Super Sunday as they went on to lose four consecutive Super Bowls. Therefore, I couldn’t choose just one choke from this era of Bills’ football, so I went with two. 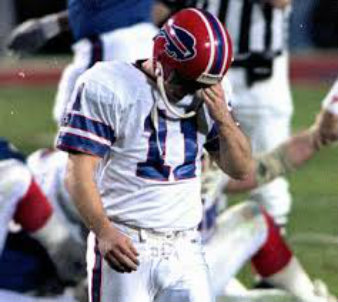 Buffalo’s best chance to win a championship came in their first Super Bowl appearance against the New York Giants in Super Bowl XXV. Trailing 20-19 with eight seconds to go in the game, a 47-yard field goal attempt would decide if Bills’ kicker Scott Norwood’s name would live on in football immortality or football infamy. Famed Bills’ radio announcer Van Miller set the stage perfectly with his dramatic line “Scott Norwood, rarely raises his voice above a whisper, he can fire the shot heard ’round the world now and win a Super Bowl.” Unfortunately for the Bills’ faithful, Norwood’s kick sailed wide right by a few feet.


While Buffalo’s first choke job can be pinned on one player, their second choke was as a collective unit. In Super Bowl XXVII against the Dallas Cowboys, the Bills managed to commit a Super Bowl record nine turnovers. The opportunistic Cowboys converted these turnovers into 35 points and destroyed the pitiful Bills 52-17. In fact, had it not been for Cowboy defender Leon Lett’s infamous blunder near the end zone in the video above, Dallas would have set the NFL record for most points scored in a Super Bowl. 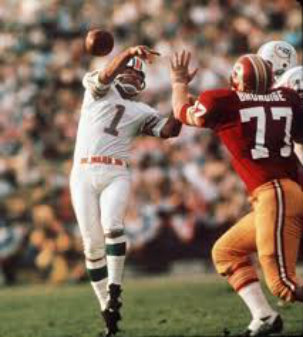 Garo Yepremian kicked 210 field goals in his 14-year NFL career and was voted onto the 1970’s NFL All-Decade Team. Despite these accomplishments, Yepremian is mostly remembered for his Super Bowl fumble that nearly cost his Miami Dolphins the game. With a 14-0 lead late in the fourth quarter, Yepremian’s 41-yard field goal attempt was blocked. Rather than just falling on the loose football, Yepremian recovered the ball and attempted a forward pass. In his haste to get rid of the football, Yepremian accidentally batted the ball in the air and it was returned for a touchdown by the Washington Redskins. Miami went on to win 14-7, but this play is commonly referred to as “Garo’s Gaffe”.