In May, the Buffalo Bills ownership had no timetable in the pursuit of either pushing for a new stadium or looking for money for yet another renovation of the team’s present home that opened in 1973. But Kim Pegula now has a fixed date in mind to discuss stadium options with New York State elected officials. Sometime after November 7th. New York will either re-elect Andrew Cuomo, who directed state money for a second Bills stadium improvement in 2014, or a new governor, Marcus Molinaro on November 6th. Bills ownership’s lease in the Orchard Park facility ends in 2023. But Bills owners can opt out of the lease in 2020. Cuomo helped find state money that was part of a deal to spend $130 million to fix up the stadium in exchange for extending the team’s lease. Because of an opt out clause and the fact that stadium planning takes a while, time is becoming a factor. In May, Pegula told the Buffalo News, “I know fans in Buffalo don’t want higher ticket prices, they don’t want PSLs. The state doesn’t want to give you any money, the city doesn’t. We don’t have a billion-and-a-half dollars sitting around. We used it to buy the team.”

Money is a problem. Buffalo got an American Football League franchise in 1959 and was a contender for an NFL team in 1950 after four years in the All America Football Conference. But the 1959 Buffalo is not the same as today’s Buffalo which is much smaller and far less wealthy. Buffalo might not even be considered by NFL owners if the city was vying for a team today. Prior Bills ownership tried to widen the team’s market by playing games in Toronto and holding training camp near Rochester. The Toronto experiment failed but the team has Ontario based ticket holders. Bills’ ownership quest for a stadium starts November 7th. 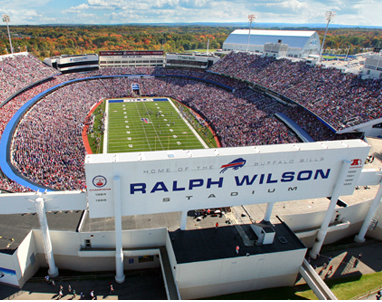