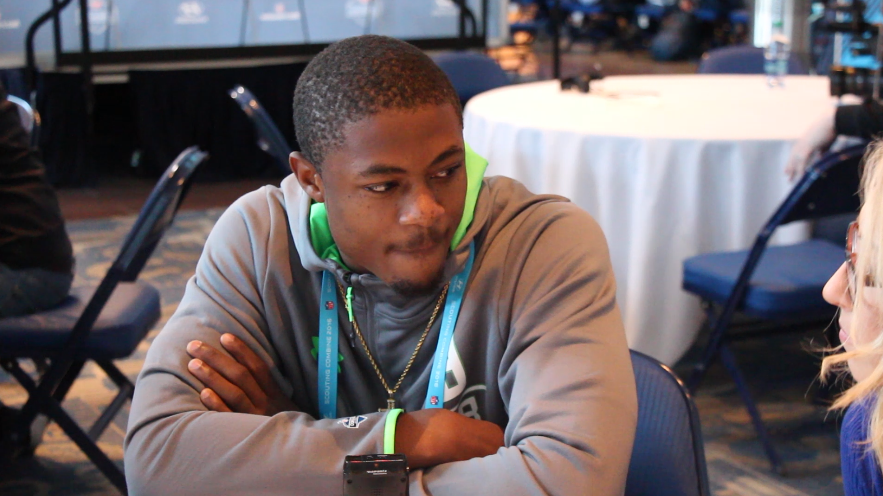 INDIANAPOLIS — Former University of Miami Hurricanes cornerback and track star Artie Burns  put together a strong performance at the NFL Scouting Combine Monday, making him one step closer to realizing his NFL dream. But just getting to Indianapolis was a victory itself after a season marred by tragedy. In October, his mother Dana Smith, a former  track star at Miami Northwestern High School, passed away from a heart attack at the age of 44. Burns said he’s still trying to cope with the loss.

Smith was a huge supporter of the Miami Hurricanes football program and Burns’ NFL dreams, which is why she’s been on his mind the entire trip in Indianapolis.

“She’s here too,” Burns said. “I make sure everything I do, every move I make is for her.”

He’s also thinking of the football program and community back in Florida that supported him throughout the loss, with teammates creating  T-shirts with her image and a fan base that raised over $40,000 to cover her funeral and  other expenses for the family.

“It was pretty tough but I had a lot of good teammates. They rallied around me. They made sure they stood at my side. Whenever I was down or looking like I needed something, they were always there for me. The coaching staff, the administration, whoever was around me, they were always there to help me. I really appreciated ‘The U.’ That’s why I’m here, to make sure I don’t let them down.”

As if the unexpected loss of his mother wasn’t enough, Burns’  father is currently incarcerated. At 20 years old, he  now has custody of his two younger brothers and he has a son, creating a huge financial burden. It’s one of the main reasons he chose to declare early for the 2016 NFL Draft. With everything he’s dealt with, it’s easy to see that he’s ‘beaten the odds.’ In his mind, though, that’s not really the case — he got where he is today because of the high standards he set for himself.

“I’m not beating the odds for myself because I expected it.” He added,  “God’s always got a plan for everybody. You can’t really question it. You’ve just got to keep working and put your faith in Him. If you start questioning it, things go bad for you. I just take one day at a time…and just go to work.”

Artie Burns (@MiamiHurricanes) can run with the best of ’em.