INDIANAPOLIS — It’s no secret that Corey Coleman is one of the best, if not the best wide receivers in the 2016 NFL draft. He’s an exceptional athlete with rare position flexibility that NFL teams covet. Coleman hails from the 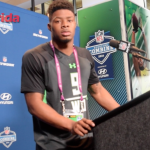 Baylor University which is a college program that has recently taken on the moniker “Wide Receiver U.”

Art Briles is the architect of Baylor’s explosive passing attack, but the receivers that racked up gaudy numbers in Waco, Texas  haven’t reached their apex in the NFL. Josh Gordon is the lone exception, but his off the field transgressions have dimmed his star.

Perception is reality, and many talent evaluators believe that wide receivers across the college football landscape coming from spread offenses take at least a year to adjust to the NFL. Coleman is hoping to prove his doubters wrong and make an immediate impact in the NFL.

Questions surrounding  Coleman’s ability to assimilate  the wide receive position in the NFL have been mounting since he announced his intentions to declare for the draft. During his time with the media, Coleman was able to debunk multiple football myths while making a  case as to why he warrants heavy consideration in round one of the 2016 NFL draft.

Coleman will only be participating in the vertical jump, and the bench press at the Combine, but he will likely improve his stock at his pro day.