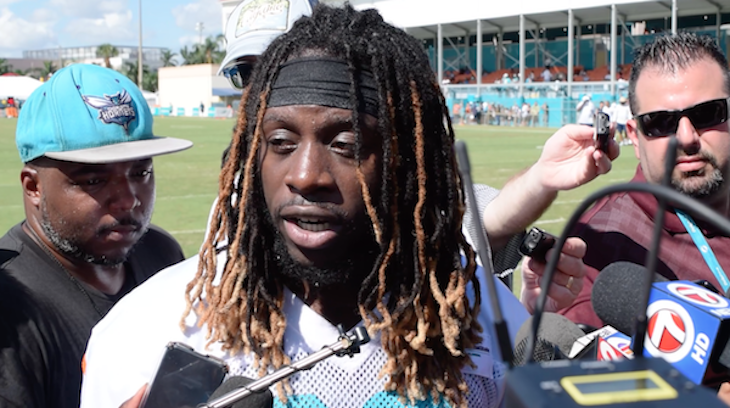 Prior to last season, Jay Ajayi predicted that his 2016 campaign would be the “year of the jump.” The statement proved to be a self-fulfilling prophecy as he became one of the most productive backs in the NFL.

Ajayi amassed 1,272 yards and eight touchdowns on just 260 attempts. He also joined Earl Campbell, O.J. Simpson and Ricky Williams on a short list of running backs who have rushed for at least 200 yards in three consecutive games.

Now that Ajayi has a break-out season under his belt, he has since shifted his focus and says he simply “just wants to be great.”

“I know my role and I’m comfortable with what I know,” Ajayi said. “Now it’s just about pushing myself every day coming out here and striving to be great, working on the little details here and there to really stretch my game and really take my game to another level.”

How exactly does Ajayi plan on taking his game to another level? The answer is quite simple: he wants to be a more complete back in 2017.

Ajayi had 27 catches for 151 yards last season but he spent a great deal of the offseason becoming a better receiver. While he wasn’t necessarily a liability catching the football, he was occasionally replaced by the likes of Damien Williams and Kenyan Drake on passing downs.

“I’ve been working hard on it (catching the football) all offseason. It’s been something I’ve been working to get real comfortable (with). I believe I can do it; I believe I have the skill set to do it, and I’m striving to be that all-around back that never needs to come off of the field.”

Ajayi’s improvement catching the football is palpable and worthy of recognition, but his true value will be measured in his contributions on the ground. He’s a tough physical runner who rarely goes down on first contact and it will be interesting to see if he’s able to match or exceed last year’s production.

Chances are he will not have three consecutive 200-yard games this season but he did become the starting running back until Week 5 of the 2016 season.

With five more starts and coach Adam Gase’s willingness to take the ball out of Ryan Tannehill’s hands and into the belly of the beast – Jay Ajayi, it is very possible that he’ll put up comparable numbers in 2017.