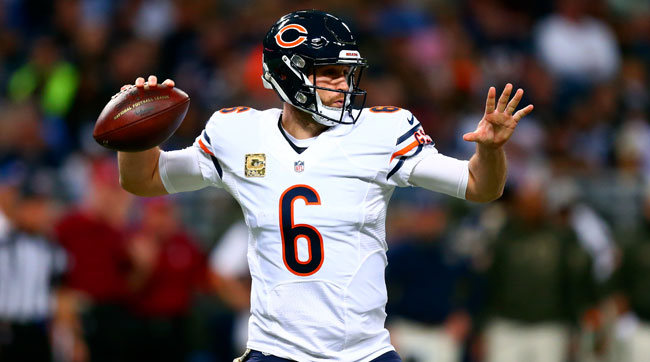 It is unclear just how long Ryan Tannehill (knee) will be out of the lineup, and while the Dolphins have a great deal of faith in Matt Moore, there must have been a great deal of trepidation with asking him to lead the team for an extended period of time.

Tannehill’s latest injury forced the Dolphins to take a look at acquiring another quarterback and coach Adam Gase looked no further than the quarterback he coached while serving as the Chicago Bears’ offensive coordinator – Jay Cutler. Gase helped Cutler achieve a 92.3 passer rating in 2015 as he racked up 3,659 yards and 21 touchdowns with just 11 interceptions.

ESPN reports that Cutler has agreed to a one-year $10 million deal, plus incentives which are currently undisclosed. Cutler chose to retire following the 2016 season and was expected to contribute as an analyst for FOX-TV. However, the 34-year old quarterback’s future changed course when Gase came calling and asked if he’d be interested in joining the Dolphins following Tannehill’s injury.

Cutler has a career record of 68-71 as a starting quarterback in the NFL but Gase has a level of familiarity and understanding of Cutler that very few coaches possess. Considering the weapons around Cutler in Miami, as well as Gase’s ability to relate to the enigmatic quarterback, it is possible that he could have a very good season with the Dolphins.

The Dolphins do have questions along the offensive line with the biceps injury to Ted Larsen, but Gase anticipates that Larsen will be able to play this season.

Larsen’s health will be an integral part of the offense’s success, considering the fact that they just acquired a quarterback who isn’t particularly mobile and isn’t known as an anticipatory thrower.

If the offensive line is able to gel, and keep the quarterback upright, Gase and the front office opting for Cutler makes a great deal of sense. If they are unable to protect the quarterback, many will wonder why Colin Kaepernick, who is capable of extending plays with his legs wasn’t given greater consideration.