Stan Kroenke is not the most popular soccer owner in London.

The National Football League’s on-going endeavor to establish a major foot hold in London continues as the third game of the London series is scheduled between Arizona and the Los Angeles Rams. This is a home coming of sorts for Rams owner Stan Kroenke who owns the Arsenal team of the English Premiere soccer league. Kroenke is not a popular owner in London as his team is not very good and he has critics in England for more than just having a soccer team with a mediocre record. Kroenke brought a hunting TV channel to England that has been condemned by the League Against Cruel Sports. But neither the Arsenal record nor the protests against Kroenke’s channel should get in the way of the NFL’s desperate attempt to find some international spot to grow the game. The NFL is not making money in England. Other sports have an international presence, a major one at that, the NFL barely has a baby step outside of the United States.

As the NFL looks for more markets, Mexico City is one, will local populations accept football and another question. Will local populations understand the whole national anthem protests and the back and forth between the President of the United States and his supporters and those who are protesting? Do some traveling outside of the United States and there are all sorts of questions that are brought up about American politics. People globally watch Washington and the global returns are worth investigating as people have sharp opinions about America in 2017. The NFL would like to stage more games on the European continent and perhaps return to Canada. But the NFL has placed limitations on its international invasion. Mark Waller, the NFL’s point man in arranging global games said “the likelihood of us playing a regular season game in Australia is almost non-existent.” 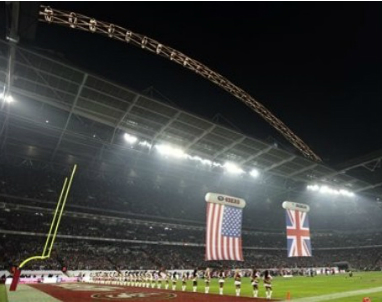 Another London GAME ON TAP.