Willie Beavers on the Rise Thanks to Versatility, Footwork 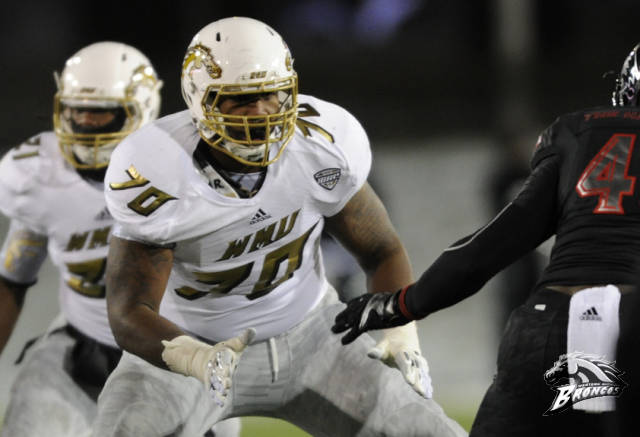 Meet Western Michigan offensive lineman Willie Beavers, a player whose stock has risen thanks to the fact that he can play inside and out — at both tackle and guard — and has exceptional footwork.

Beavers is 6-foot-4 and 324 pounds, and since the end of his redshirt freshman season, he’s been the starting left tackle at Western Michigan. In fact, he started 40 straight games at the position

But some teams see him as a right tackle and at the Senior Bowl, he lined up at guard.  One offensive line coach I spoke to said he likes him at both left tackle and guard because of his frame, but he is versatile enough for both.

“It was little difficult at the Senior Bowl, just getting used to it,” Beavers said of working inside. “I’m up for it. I’m up for the challenge. I think I can play any position on the offensive line.”

Regardless of where Beavers lines up, his footwork and his athleticism are his strongest traits, skills he developed from playing football, basketball and baseball growing up.

You may remember another MAC offensive tackle in recent years, Eric Fisher, who was selected first-overall in the 2013 NFL draft by the Kansas City Chiefs. Interestingly enough, Beavers said they have a lot of the same qualities.