The NFL Remains Popular But Has Lost Some Support

It’s early and there should be no reason for panic at NFL headquarters and at the offices of Comcast, Disney, CBS and Rupert Murdoch’s FOX. But Thursday night’s opening pre-season game that featured America’s Team, the Dallas Cowboys although that claim can be disputed, and the Arizona Cardinals did not exactly break the people meters. The NBC-Comcast television show did win the night beating out competitors on CBS, ABC, FOX and the CW Network but overnight ratings for the league and TV executives had to be disappointing. NBC had 7.8 million viewers with CBS’s Big Brother the only program that was closer in eyeballs with 6.3 million watchers. The NFL and NBC ruled the Thursday night TV watchers race but the 2017 number was lower than the 2016 ratings. The 2016 Hall of Fame Game was held on a Sunday night.

What does this mean for the NFL and TV? Probably nothing games featuring two teams with a whole lot of players who will be doing something else on Labor Day after they fail to make the regular season roster attract just hard-core fans and gamblers. But it was the first indication whether people are back in front of the television or if there is continued television ratings erosion. The erosion continues at least in August. The NFL has had a rough time of it lately in the public relations area. The NFL has unofficially blackballed Colin Kaepernick for his social stance. There was a so-called distraction in Baltimore this week with Ravens owner Steve Biscotti allegedly blocking his football people from hiring Kaepernick. The league has said nothing but John Mara the Giants owner said plenty when he said if he signed Kaepernick, there would be a backlash against the Giants. Meanwhile there might be another reason that there is television ratings erosion. Concussions. Concussions are a major football industry problem.

Not even “America’s Team”, the Dallas Cowboys, could bring as many viewers before the TV screens as previous Hall of Fame Games. 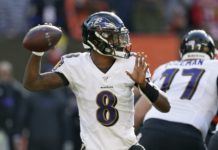