The most important trait for a cornerback is confidence. Every now and then a cornerback is going to be beaten, but he must quickly put it behind him so that it doesn’t happen again. 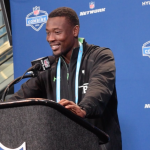 Players and coaches refer to it as having a short memory. Mackensie Alexander takes confidence to an entirely different level as he believes he cannot be beaten, and if he is, it’s a mere aberration.

If Alexander is beaten on a play, he’s never defeated, he truly believes that he is the only one responsible for any of his on-field lapses. “If you [an opposing wide receiver] get one, good, I gave you that, you didn’t beat me,” Alexander said.

Many will take Alexander’s confidence as arrogance, but he prepares harder than most in order to have success on game day. Alexander often times is so anxious to break down film leading up to game day that at times he’ll skip showers after practice in order to get a jump on film study.

While he might not have smelled the best leading up to Saturdays, he made certain that if anything smelled a fowl, it was the play of the wide receiver lining up across from him. Alexander did not record an interception during his two years as a starter at Clemson, but he didn’t have many opportunities to register one.

Teams didn’t throw to Alexander’s side very often as he essentially shut down his half of the field every week. He has the footwork, recovery speed and patience necessary to not bite on double moves that teams covet and he’ll likely be a top-15 pick in the 2016 NFL draft.

Alexander’s tendency to skip showers might be something that his new teammates have to get used to, but they’ll certainly appreciate his winning attitude. His belief that he cannot be beaten will be welcomed, wherever he goes.