Trump is running down the NFL.

Today is just a Sunday in America in the fall. In past years it was a giving that people would sit in front of their televisions watching and enjoying a politically stress free National Football League game on CBS or FOX or NBC, eat, bet, watch and enjoy the experience from morning to night. But these are very different times for the league which remains the gold standard in American sports. Over the past decade, there have been trouble spots, players arrested, a suicide-murder, Aaron Hernandez and concussions. Owners also got in legal trouble, Cleveland’s Jimmy Haslam and Indianapolis’s Jim Irsay. But a players led political and social insurrection has ended up with Donald Trump and his supporters condemning players who have staged a protest during the playing of the Star-Spangled Banner for what they perceive as unnecessary police brutality against members of the African-American community that has become problematic and upset some fans. It started with Colin Kaepernick in 2016. NFL owners and players are now talking about a future direction in social stances. A national conversation on the issue is needed.

TV ratings fell for last Monday Night’s ESPN NFL presentation yet the NFL did get nearly 12 million people watching the Kansas City-Washington game. But ESPN lost 16 percent of the audience which the week before watched the Dallas-Arizona game. Sunday night’s NBC game between Seattle and Indianapolis saw a five percent ratings erosion compared to the week before when Washington and Oakland played. Dallas and Oakland attract more viewers. Seattle, Indianapolis, Kansas City and Washington don’t. NFL TV ratings are solid and remain at the top of the TV business. It is also unprecedented in American history that a sitting President is running down a sports organization on a regular basis. The real NFL TV ratings test will come with January playoff games and February’s Super Bowl. 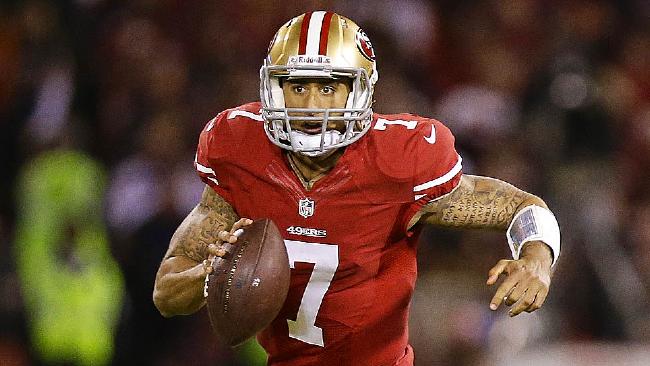 Colin Kaepernick’s protest has sparked unrest among some NFL fans.

The Lockout Is On But Will People Notice?