TCU quarterback Trevon Boykin took the time to speak with reporters in Indianapolis following his on-field workout at the Combine. After answering questions about his off-the-field incident which caused him to miss the Alamo Bowl, he was subsequently peppered with questions about  playing wide receiver in the NFL. Boykin is relatively inexperienced at the wide receiver position, but there is a large contingent of people who steadfastly believe that 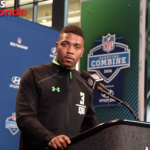 Boykin  must play wide receiver to have a career in the NFL.

Boykin has been in the Heisman Trophy discussion for each of his two years at the quarterback position, but suddenly he’s a wide receiver? For those clamoring for Boykin to play wide receiver at the next level, it’s important to realize that Dolphins quarterback Ryan Tannehill led his team with 46 receptions for 609 yards in 2009. Boykin had 26 receptions for 204 yards in his best season at receiver.

Boykin’s career numbers at quarterback dwarf Tannehill’s, but was Tannehill asked to consider playing wide receiver in the NFL? Did Tannehill work out for NFL teams at wide receiver? The answer is no. Tannehill  put up just half of Boykins’ career yardage through the air while testing out as a better athlete than the TCU quarterback, yet Boykin is the one being questioned about his ability to play quarterback in the NFL. While I believe that Tannehill is a quarterback that can win games for a team in the NFL, Boykin has done more than enough on the field to warrant the same respect given to Tannehill upon declaring for the 2016 NFL draft.

In every NFL draft there are true dual-threat quarterbacks who can throw the ball with timing and accuracy, but also have the ability to  move the chains with their legs as their mobility makes the game 11-on-11. Many of them have been met with an unwarranted level of scrutiny during the evaluation process, as their football acumen and overall intelligence is routinely questioned. Both Cardale Jones and Boykin felt it was necessary during their time with the media at the Combine to highlight their ability to process information on the field because they are often unnecessarily slighted in that regard.

Much of the skepticism about Boykin’s ability to play quarterback in the NFL is  baseless, and whether it’s intentional or not, there’s a dangerous, and very insensitive message being sent when he’s harassed about playing wide receiver in the NFL. In 2015 Louisiana Tech quarterback Jeff Driskel put up similar numbers to Boykin’s 2014 season. Driskel wowed scouts with his athleticism during on-field drills at the Combine. Driskel posted an outstanding time of 4.56 in the 40-yard dash while Boykin ran 4.77, but not once was he asked about playing wide receiver or tight end during interviews.

Playing quarterback is what’s in Boykin’s heart, and he’s demonstrated enough on the field to at least have an opportunity to fail or succeed at the position. Professional sports are celebrated in part because it’s  the closest thing in America to a true  meritocracy. With that said, there have been several transgressions levied against those that don’t fit the traditional mold of the positions they’re applying for in the realm of athletics. If Boykin is not at least given a legitimate chance to play quarterback in the NFL, it will be a shame, and a true testament to the inability to fairly evaluate mobile quarterbacks.