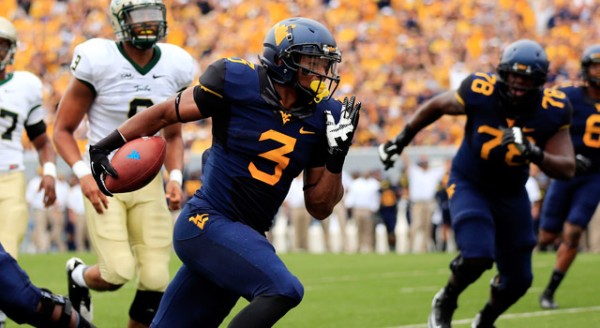 Charles Sims was the Conference USA Freshman of the Year, a first team All-Conference USA performer, and the Andre Ware Offensive MVP while at the University of Houston. In his one year at West Virginia, Sims also earned first-team All-Big 12 honors in 2013.

The Tampa Bay Buccaneers only had six selections in the 2014 NFL Draft. And with starting running back Doug “The Muscle Hamster” Martin missing 10 games in 2013 due to injury, the Bucs were in serious need of some depth in their offensive backfield. Let’s break down their third-round pick Sims who may prove to be the solution to Tampa Bay’s depth issues at tailback:

Skill Set: As a runner, Sims is a fluid athlete that possesses good footwork, displays quickness in and out of cuts, and doesn’t lose much speed when he changes direction. But the thing that separates Sims from the rest of the running backs in this draft is his pass catching ability. According to NFL Network’s draft guru Mike Mayock, Sims is “as good a receiver out of the backfield as any running back in the draft.”

Value: Running back has been an undervalued position in the last two drafts as there were no first round picks from this position for two years in a row.  But when you consider that the running back needy Buccaneers were able to select the fourth player off the board at this position, and only spent a third round pick to do so, one cannot argue that this pick was an absolute bargain in terms of value.

Who Else Did They Pass Up?  Since Tampa Bay was looking at running backs in this part of the draft, it is worth noting that SEC Offensive Player of the Year Tre Mason of Auburn was still available. However, Mason is not nearly the receiving threat out of the backfield that Sims is. Sims also has more size than the 5’8 Mason and is slightly faster in the 40-yard dash as well (Mason ran a 4.50 at the Combine). Other running backs that were still available at this point in the draft included small school standouts like Terrance West of Towson, Jerick McKinnon of Georgia Southern, and Dri Archer of Kent State.

The Fit: Barring injury, the Bucs probably feel secure with former Pro-Bowler Martin as their starting halfback. This pick was mostly about adding a new wrinkle to the offense with a prolific pass receiving threat out of the backfield. Sims does not project as a workhorse back at the next level, and his role on the Bucs won’t require him to carry the heavy load. If Martin can return to his 2012 Pro-Bowl form, Sims looks to be a very nice fit in Tampa Bay for years to come.

2014 Outlook & Beyond: If fellow rookie Mike Evans can deliver on his first round promise at wide receiver, it will give Sims plenty of room to operate in underneath coverage. With threats like Evans and veteran receiver Vincent Jackson on the outside, second-year signal caller Mike Glennon would be able to fire off plenty of short and intermediate passes to Sims in the flat or over the middle. In an attempt to keep Martin healthy for a full 16-game schedule, Sims may also get some early opportunities to spell Martin as a runner as well.

Here is the video of Charles Sims working out at West Virginia University’s pro day. Sims can be spotted wearing teal shorts as the running backs worked out together as a group. The Mountaineers held their 2014 pro day on March 21st.