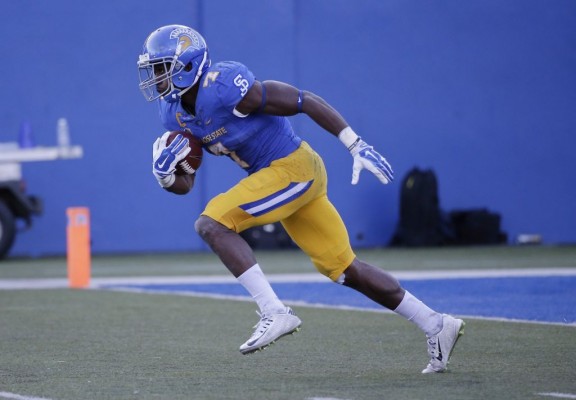 Over the years, the running back position has become devalued, and it seems as though no running back is ever worthy of a first round grade. Many believe that it is always possible to draft a running back late, or pick one up in free agency, but as I look around the NFL, only seven running backs surpassed the 1,000-yard mark in 2015.

The lack of production at the running back position in the NFL often has to do with factors such as philosophy, playing time and injuries, but there’s also a dearth of talent  among starting running backs.

There are a number of ways a running back can keep the chains moving as some accumulate yardage with power while others utilize their speed and quickness. The 2016 NFL draft is not short on talent at the position, and I’ve highlighted five running backs that are capable of making early contributions to the teams that select them.

Elliot runs with a blend of balance and power that enables him to consistently get to the second level of a defense. Elliot runs as hard as any running back to enter the draft in the last 10 years as his legs do not go dead on contact. Whether he’s hit high or low, Elliot routinely finds a way to keep his legs churning. Elliot also has a second gear which enables him  to run away from defensive backs in the open field. Elliot also seems to get stronger as games go along which is the mark of a good running back. Elliot is clearly the best running back in the 2016 NFL draft and the team that selects him will benefit from his play immediately.

At 5-foot-11, 218 pounds, Collins has very good size for the running back position, but what’s surprising about his game is his quickness in the hole. Collins makes subtle moves inside the hole that allows him to get on the edge of tacklers. His strength and pad level allows him to consistently break arm tackles. Collins also has better than average vision as he realizes that running to daylight takes precedence over following the initial play design. As a result he has proven that he is capable of exploiting backside rushing lanes.

Henry gets a bad rap for not being able to create on his own but there are numerous examples of Henry creating behind the line of scrimmage during his time at Alabama. Henry lived on a steady diet of trap and power plays as a member of the Crimson Tide backfield. Whoever decides to draft him should make certain he’s used the same way he was in college and he should see success in the NFL. Henry does run high but he protects himself by lowering his shoulder upon contact as well as keeping defenders at bay with his stiff arm. Henry also has a second gear which allowed him to regularly pull away from defensive backs.

While Drake never carried the full load at Alabama, he can certainly be more than just a third-down running back in the NFL. At 6-foot-1, 210 pounds, Drake is not a small running back by any means. Drake has outstanding hands down the field on vertical routes and in the flats. He’s the type of running back that heats up quickly and can break a long run on the first carry of a game. Running backs that don’t need to get into a rhythm to make big plays are rare, and Drake happens to be one of those players that don’t need a lot of carries to make an impact.

Ervin is one of my favorite running backs to come along in quite some time. At 5-foot-10, 192 pounds, Ervin is considered undersized. However, he is capable of running tough between the tackles and he’s incredibly shifty. Defenders trying to tackle him in the hole often whiff because of his quickness. He also demonstrates tremendous acceleration as he displays outstanding long speed once he gets into the open field. Contrary to popular belief, Ervin can be a feature running back in the NFL. If there are any NFL coaches that believe otherwise, it’s more of an indictment on them than it is Ervin’s actual play.