INDIANAPOLIS — Tyler Ervin entered last month’s Senior Bowl as a relative unknown but during his time in Mobile, Alabama, he impressed many with his speed, 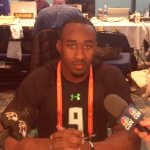 consistency catching the ball out of the backfield, and ability to make defenders miss in confined space. Prior to weigh-ins at the Senior Bowl, Ervin was listed at just 5-foot-10, 177 pounds but the scouts were pleasantly surprised when he tipped the scales at 192 pounds. While it seems Ervin packed on 15 pounds of muscle just before the Senior Bowl, that simply wasn’t the case. Ervin played his final year at San Jose State at 185 pounds and added just seven pounds before the Senior Bowl.

While teams are happy about his weight gain, many doubt his ability to carry the load as a feature running back in the NFL. If anyone doubts his ability to remain durable while running between the tackles, his game film is more than enough to dispel the myth that his size is reflective of his playing style. Ervin was San Jose State’s entire offense. He moved back and forth between running back and wide receiver and proved to be effective at both spots. Ervin does a very good job of setting up his blocks and breaking long runs along the interior and he possesses vision and quickness that translates to the next level.

Teams are very reluctant to give running backs of Ervin’s stature an opportunity to stay on the field on every down, but Ervin’s skill-set transcends his perceived lack of size. Ervin told reporters on Wednesday, “It [his size] doesn’t affect the way I play. I think it’s more of a mentality. You just have to go in there and do your job. At the end of the day, I think I’ll be successful at what I do.”

I agree with Ervin, he’s going to have success in the NFL as long as a coaching staff is confident enough in themselves to give him enough touches to have a true impact on the game. If his skill-set is marginalized by evaluators due to his size, he’ll be another pigeonholed part-time player, and I think we’ve had enough of that in the NFL. It’s time for NFL coaches to open their minds to the idea that every running back doesn’t have to be the size of Ezekiel Elliot to be an every down running back. Give Ervin  touches 15-20 touches a game and let him be the athlete he is; your team will be better for it.