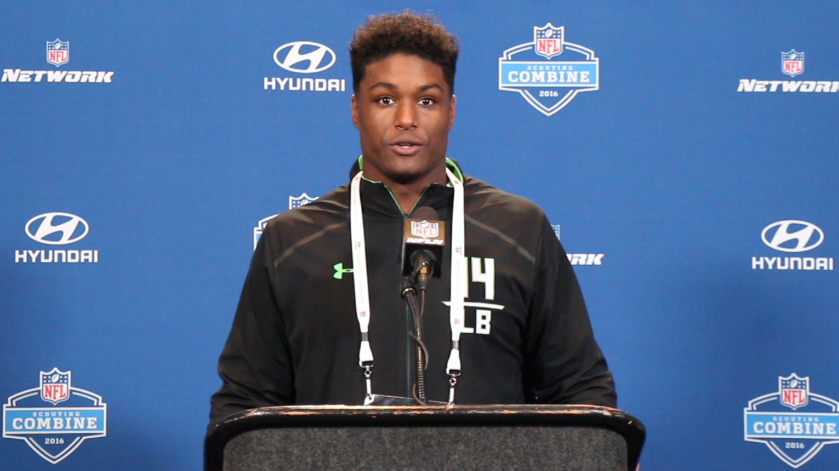 INDIANAPOLIS — Heading into the 2015 college football season,  UCLA star linebacker Myles Jack was  projected as a first-round draft pick. But then adversity struck for the junior two-way player — he suffered a torn meniscus during practice and was forced to miss the remainder of the season. Having missed time in school and facing a four to six-month recovery window, Jack made the difficult decision to leave school and declare for the NFL Draft. He now says he is ‘100 percent’ recovered, and although he didn’t test at the NFL Scouting Combine, he’s ready to take his game to the next level.

“It was scary. I knew something wasn’t right. I didn’t exactly know what wasn’t right. I couldn’t straighten my knee,” Jack recalled.  “It was definitely a frightening experience. It was tough for me — leaving and everything, being injured for the first time in your life, you can’t do what you love to do — it’s tough.”

His mother, LaSonjia, immediately flew in from Atlanta to be with her son, helping him around and cooking his favorite shredded chicken and ground turkey tacos. She also had to help him make a difficult decision — rehab at UCLA and return for his senior season or  leave school early and declare for the 2016 NFL Draft.

“The doctor basically told me my season was over with so I had to make a decision pretty soon, considering the time frame.” Jack said. “I just went for it.”

Jack then moved to Phoenix to train at the renown Fischer Institute, the same place All-Pro cornerback Darrelle Revis rehabbed from his infamous ACL injury. It was there that Jack learned how to be a pro and truly take care of his body. “It’s been a blessing,” he said.

And while Jack declared that he is fully-recovered, he wasn’t quite ready to test in Indianapolis. He’s saving himself for his UCLA Pro Day March 15.

“I plan to go out there and jump, do all my drills [and] hopefully run my 40 — that’s really the thing because I just got cleared [February] 22nd. So from this day forward, it’s been a month and two days that I’ve been running.”

The combine did delay his  rehab just a bit because of the extensive interviews and medical testing. It hasn’t deterred him though. He may not run in the 4.40s like he did pre-injury, but he’s got realistic expectations and said he’s “perfectly fine” running a  4.50 or low 4.60.

“My goal is to just erase all doubt of this injury and really just solidify my position in this draft.”