Trump does not like NFL players protesting by sitting during the National Anthem.

It remains to be seen whether the President of the United States’ words about National Football League players kneeling during the National Anthem or other players expressing support by placing a hand on a kneeling player is going to have any impact on this Sunday’s slate of games. The President criticized the players and had a suggestion for NFL owners during a Friday night speech in Huntsville, Alabama. The message seemed straight from a staged television show that once featured the sitting president.

“We’re proud of our country, we respect our flag,” Donald Trump told his supporters. “Wouldn’t you love to see one of these NFL owners, when someone disrespects our flag to say, get that son of a bitch off the field right now! Out. He’s fired! He’s fired! You know some owner’s going to do that. He’s going to say, that guy who disrespects our flag, he’s fired!‘ It appears that NFL owners have done what Donald Trump said suggested. Colin Kaepernick opted out of his San Francisco 49ers contract following the 2016 season and has not been able to get another job. Kaepernick began his silent national anthem protest of a number of things including what he perceived as police violence against African Americans in August 2016.  Kaepernick was not the first to protest earlier during the summer of 2016, a quartet of NBA players including LeBron James, Dwayne Wade, Carmelo Anthony and Chris Paul staged a human rights protest during the ESPN’s ESPYs presentation. None of those four received any backlash. Kaepernick’s protests on an NFL field maybe over but others have followed suit with other players kneeling or raising a fist which echoes the 1968 Mexico City Olympics human rights protest by John Carlos and Thommie Smith. The NFL will find out today if there are more protests. Athletes want to be heard. 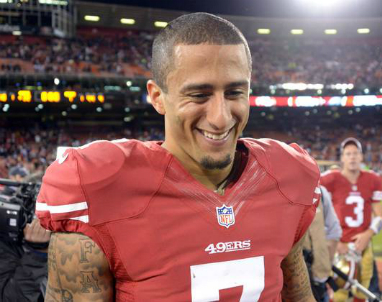 Kaepernick is not playing in the NFL in 2017.