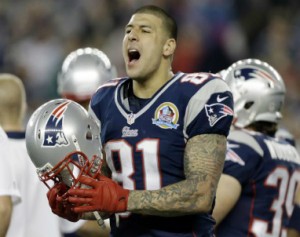 The fight between the New England Patriots and the NFL Players Association over the money that tight end Aaron Hernandez was scheduled to receive will commence shortly as the NFLPA is preparing to file a grievance on Hernandez’s behalf over an unpaid $82,000 workout bonus, Mike Garafolo of FOX Sports 1 reports.

Hernandez was scheduled to receive the $82,000 workout bonus, which was included as part of his rookie contract, on Aug. 1. The Patriots have not paid that amount to Hernandez, who has been held without bail in Bristol (Mass.) County Jail after being charged on June 26 with first-degree murder in the June 17 killing of Odin Lloyd.

For more on this story visit: Bryan McIntyre, Yahoo Sports