NFL Quarterbacks On The Move In 2017

The 2017 NFL Draft not surprisingly will feature several teams picking high that need a quarterback. The Browns, 49ers, Jets, Bears, Jags, and Bills could all be interested in a new signal-caller, and you can’t rule out teams with older quarterbacks like Arizona, New Orleans, and San Diego. The 2017 draft has no obvious choices at QB however. There are a few in the mix to go high, but that could lead to these teams instead opting to take better talent at other positions and seek quarterback help via free agency or trade. These are those options.

9. Matt Barkley- He’s been a pleasant surprise since taking over in Chicago. If he’s not earning the backup job for the Bears next season, he’s certainly doing it somewhere.

8. Robert Griffin III- Can’t imagine him getting another shot in Cleveland, but can definitely see plenty of teams considering him to be a clipboard holder.

7. Colin Kaepernick- I wouldn’t look to him to be a starter, but instead a system-backup. I can’t see his career continuing in San Francisco.

6. Mike Glennon- Intriguing option. Will be 28 to begin next season, but has less than a season’s worth of starts under his belt. The 6’6″ QB did have a strong TD-INT ratio (30-15) when he played. Might be a smart investment as a backup, if not a low-priced starter ala Tyrod Taylor a couple seasons ago. 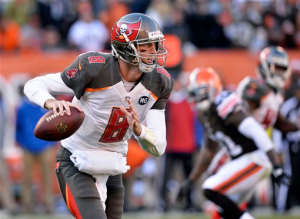 5. Jay Cutler- Talented, but you know all the questions about his demeanor and leadership. My guess is a team that drafts a quarterback of the future may bring him in to hold down the fort for a season or two.

4. Brian Hoyer- In his last 17 regular season games (Houston and Chicago) the 31-year old has a 25-7 TD-INT ratio. That probably caught you off-guard. I firmly believe he is still the Texans QB if he didn’t IMPLODE in the playoffs a year ago. He either becomes one of the best backups in football, or a sneaky flyer as someone’s starter.

3. Tony Romo- He’ll be the most discussed player of the offseason (unless he actually wins the job back in Dallas). He’s been hurt most of the last two seasons though and is going to be 37 before next year. He could be difficult to trade, and his value may not be what is perceived. Denver makes the most sense, but Rams and Jets could want to make the splashy move too. 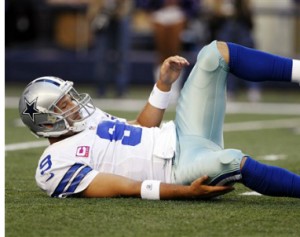 2. Tyrod Taylor- Surprised? Taylor is doing virtually the same thing this year as last, but the Bills reportedly are losing patience. Plus after signing him to a deal that there is no way they’d follow through with this season because of the cap-hit, it’s likely the either move on or renegotiate. He could be a great option for either a rebuilding team like San Francisco, or even a team close to winning like Denver

1. Jimmy Garopollo- Is less than 2 games of work enough? I think some GM will convince himself the poise and accuracy (2 wins, 70% passing, 4 TD, 0 INT) we saw is enough. The question is how many of the teams needing quarterbacks will bid and what will the Pats demand in return? Considering the Patriots have a going-on-40-year-old QB, will they even look to deal him? I don’t know that he’ll be talked about as much as Tony Romo (probably not), but there is no doubt the 25 year old isn’t a win-now solution as much as a build-the-team-around-him one. Brock Osweiler did less in a larger sample size and cashed in. Matt Cassel cost the Chiefs the #34 pick in the draft back in 2009, but that was after a strong fill-in effort when Brady went out for the year. To me, they drafted Jacoby Brissett for this reason: Win now with Brady and move Garopollo for more help now.