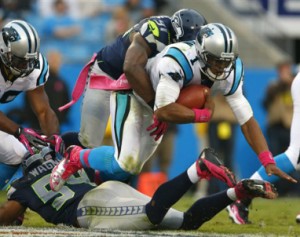 CHARLOTTE, N.C. (AP) — The Carolina Panthers enter the bye week with plenty of problems to fix, not the least of which is the inconsistent play of quarterback Cam Newton.

Coach Ron Rivera says he thinks Newton is pressing. Rivera says Newton “wants to make things happen so much. . It’s all part of him developing as a football player.”

Newton, last year’s AP offensive rookie of the year, struggled again during Sunday’s 16-12 loss to Seattle. Newton was sacked four times and completed just 12 of 29 passes for 141 yards as Carolina’s offense failed to produce a touchdown.

Rivera says defenses have adjusted to Newton and the Panthers’ style of offense, which means Newton must go for shorter pass completions rather than attempting to force the ball down the field.