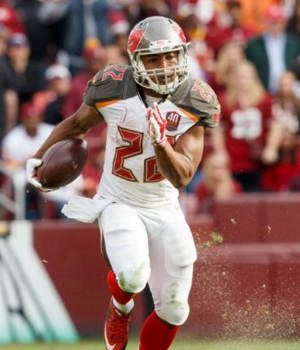 The  Tampa Bay Buccaneers have re-signed running back Doug Martin,  completing a deal with less than 90 minutes to spare before the new league year begins Wednesday at 4 p.m. ET.

The deal is for five years and worth $35.75 million. It includes $15 million in guarantees with incentives that would push the deal to $42.5 million.

“Our top priority heading into this offseason was to ensure that Doug remained a Buccaneer and today we are excited to announce that he will,” Bucs general manager Jason Licht said in a statement.

“Many of our offensive accomplishments last season can be attributed to the success of our running game with Doug in the backfield and we believe he is a perfect fit for our offensive system. It is always satisfying when you get the opportunity to reward one of your own players and Doug certainly has earned his place as one of our young foundational players.”

Martin is coming off his second Pro Bowl season in 2015, where he rushed for 1,402 yards on 288 carries, producing a career-best 4.9 average. He also finished with 271 receiving yards and seven total touchdowns.

Martin’s 2013 and 2014 seasons were marred by injuries. He finished with 456 and 494 total yards respectively. He was placed on season-ending injured reserve in 2013 because of a shoulder injury. He appears to have bounced back since.

“It’s definitely been a journey,” Martin said in a conference call with the Tampa Bay media. “Having a great season in 2012 and getting injured and being out for the season, and having injuries here and there in the third season.”

“But to come back from that adversity and coming back last year as strong as I did, it definitely makes me proud and I’m glad that it happened that way.”

Now that the Bucs have retained Martin, they’ll need to find a replacement for Pro Bowl left guard Logan Mankins, who announced his retirement this week.

After the signing, Martin’s agent, Brian Murphy, tweeted the following:

Congrats to @DougMartin22. Doug was adamant about staying in TB bc he loves the team and fans. Real honor to work 4 a man of principle.

Can’t forget about that boy @DougMartin22 You earned every bit of that!!

Just heard that my guy doug is coming back!!!! Yes!!! One of the moves I was waiting to hear!… https://t.co/lSoIPNT2MV

Martin was expected to be one of the most highly-sought running backs in free agency, but he said he always wanted to remain a Buccaneer.

“At the end of the day, we knew what was going to happen,” Martin said, adding, “I always saw myself as a Buc. I didn’t think I was going anywhere else. I’m just happy to be back with the Buccaneers.”

After he signed, he posted a heartfelt note on Twitter thanking Bucs fans.

Good to be back!!! pic.twitter.com/BPrmAHvyxK

The contract puts him at or near the top five highest salaries for running backs in the league with more guaranteed money than Adrian Peterson ($13 million).

By comparison, Chris Ivory’s newly-minted deal with the Jaguars is for five years and $32.5 million.