Before free agency began, rumors regarding the Bucs and wide receiver DeSean Jackson ran wild aided in part with Jameis Winston saying, “You better believe we want DeSean here.” Thursday all the rumors came into fruition when DeSean Jackson and the Buccaneers agreed on a three-year, $35 million contract, of which $20 million is guaranteed according to Adam Schefter of ESPN.

The addition of Jackson will open up the field for Mike Evans and create a legitimate home run threat for Jameis Winston and the Buccaneers offense. A three-year deal should be sufficient to groom a younger wide receiver to take over the WR2 role while Jameis Winston and Mike Evans ar in their primes. Jackson has broken 1,000 yards from scrimmage seven times over the course of his nine-year career, including 1,005 yards last season for the Washington Redskins.

Wide receiver was a glaring need for the Buccaneers and grabbing DeSean Jackson for the next three years should pay dividends for the Bucs providing he can stay on the field.

Another one! 💪💪💪
DL Chris Baker agrees to terms with the #Bucs! pic.twitter.com/WJgvHbVs2B

A signing that attracted a little less attention, but should be an impactful signing nonetheless, was the signing of defensive tackle Chris Baker. Baker, who, like DeSean Jackson, was signed away from Washington to the tune of a three-year deal worth over $6 million a year, according to NFL Network’s Ian Rapoport.

On top of bringing in some fresh faces to fill needs, the Bucs also used day one to keep a few of their own in Tampa Bay.

With much uncertainty regarding the future of Doug Martin in Tampa, the Buccaneers re-signed the guy who stepped up and played well when the injury bug had a hold on both Martin and Charles Sims. The Buccaneers agreed to a two-year, $3.3 million contract with running back Jacquizz Rodgers on Thursday. Rogers can obtain another million through incentives. If last year is any indication, this was a move to provide great insurance for Martin who will miss the first three games for the Buccaneers in 2017, if he is still on the team.

With one of the biggest needs for the Buccaneers filled with the signing of DeSean Jackson, the Bucs kept it in-house to help fill the hole at the safety position. Chris Conte agreed to a two-year, $5 million to remain with the Buccaneers. The resigning of Conte doesn’t completely fill the need for safety help, but does provide depth, especially if the Buccaneers wait until the draft to address the issue.

After missing out on Tony Jefferson, who has agreed to terms with the Ravens, that may just be the avenue the Bucs choose to take.

Buccaneers slow start results in loss to the Chiefs 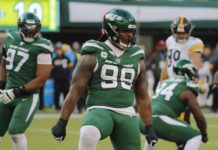