With the Bucs signing kicker Nick Folk Saturday Saturday, is Roberto Aguayo‘s days with the Buccaneers numbered or is it to motivate him?

Many people felt the Buccaneers trading back into the second round of the 2016 NFL draft to take former Florida State kicker Roberto Aguayo was a bit of a reach. Aguayo didn’t do much in the 2016 to prove his naysayers wrong. 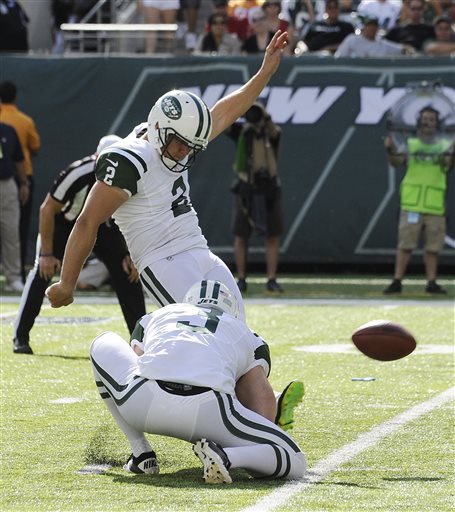 This Saturday, the Tampa Bay Buccaneers formally announced they had agreed to a contract with former New York Jets kicker Nick Folk. Is this move to motivate Aguayo into becoming the kicker the Bucs thought he was when they drafted him, or are they planning on cutting ties sooner rather than later with last year’s draft choice.

Nick Folk comes to Tampa after spending the last seven years with the New York Jets, where he set the franchise record for field goal percentage (81.3%) and ranks second in franchise history with 1172 successful field goal tries. A former sixth-round pick in 2007 by the Dallas Cowboys, Folk has been named AFC Special Teams Player of the Week twice while also securing a Pro Bowl spot in 2007.

With an impressive resume and even some playoff experience under his belt (four games), the Bucs could look to Folk to provide them with an answer at the kicker position that has been an issue for years. Doing that may be a mistake, however, as Aguayo came into the pro’s following a promising collegiate career.

Aguayo boast the title of most accurate kicker in NCAA history with the Florida State 2016 Seminoles, converting on an impressive 88.5% of his field goal attempts. That success didn’t translate into the NFL game, however, as Aguayo finished the season with just a 71% success rate on field goals.

Those season stats should be taken in stride, as Roberto Aguayo did improve during the course of the season. In the first half of the 2016 season, Roberto went 7-12 on field goal attempts for an abysmal 58.3% success rate. However in the final eight games, Roberto Aguayo went 15-19 for a 78.9% success rate, providing hope. Giving up on a second round pick after just one sub-par season could be a mistake.

On the flip side, with the Buccaneers taking steps this offseason to return to the postseason for the first time since 2007, how long can they afford to roll with Aguayo if he fails to live up to the hype in 2017? The answer is they can’t. Nothing can destroy a team’s confidence like doing enough to win, and the place kicker not being able to come through in the clutch.

The signing of Nick Folk is more than likely a ploy to show Aguayo that his position on the team isn’t safe, but if he doesn’t show an improvement to kick off his sophomore season, the leash needs to be a short one. Although Folk will more than likely not be atop the Buccaneers depth chart, he may be called upon to handle kicking duties if Aguayo beings 2017 similar to how he did in  2016.