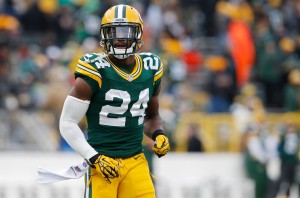 In what could be a nice addition to special teams, in an interview with Ty Dunne from the Milwaukee Journal-Sentinel, the Buccaneers have been one of three teams to express interest in former Packers cornerback and special teams ace Jarrett Bush.

Bush continues to train in Arizona, mentioning Tampa Bay, Detroit and the New York Giants as three teams that have expressed some interest. There’s been nothing concrete yet for the veteran who operates at one manic, 100 mph speed.

It’s no secret in Green Bay that Bush has been known as one of the hardest working players to ever walk through the door.

A special teams crazy man, Bush gives it everything he has, every time he is on the field.

Jarrett Bush never played the cornerback position with much success, but is a versatile guy, even playing a few snaps as a stop-gap safety in Green Bay.

However, even at 30 years old, Bush can still bolster a special teams unit in need of help, not to mention becoming the poster boy for what a hard worker really is.