Both Teams Have Plenty Of Questions To Answer

The status of the Tampa Bay Buccaneers is one of the tougher debates in the NFL right now.

Coming into the season, some had the Bucs pegged as a potential deep playoff team, maybe even a sleeper to make the Super Bowl. Coming off a 9-7 season where it seemed they left a game or two out on the table, a good offseason elevated expectations.

Four weeks into the NFL season, we’re no longer so sure. Injuries to the defense have taken the unit from an up-and-comer to an easy target. In the team’s sole loss, Jameis Winston reminded people that for all his talent he still has some bad habits he needs to get past. Their wins were a convincing beating of a Bears team that they were supposed to defeat soundly, and just barely beating a winless Giants team. All this is to say that the early season has not convinced a lot of people that the Bucs are truly the contenders some believed them to be.

Tonight, we’ll learn much more about whether the team is ready for the biggest stage or still has work left to do. The New England Patriots are coming to town, and they’re coming in off a loss. Patterns suggest that the Pats will be on top of their game tonight. A Tampa Bay win changes their status from “maybe” to “legitimate” just that quickly.

Of course, on the other side of the field they’ll see a Patriots team that has been very good at turning perceived disrespect into momentum. This week, national outlets have been asking if the Patriots are on the decline. Every other time this has happened in the past sixteen years, the Patriots have not only beaten a team, they’ve beaten them like a drum.

I moved to Boston about a week before Drew Bledsoe got hurt. I just left two weeks ago, so I’ve seen the Patriots’ entire run to this point. When people start asking hard questions, that team becomes the scariest football team you’ll ever run into. This is traditionally where Tom Brady falls into “I’ll show you” mode. This is typically where Bill Belichick earns his paycheck and full dance card. Some very good teams have been dismantled by the Patriots in exactly this situation: Coming off a loss with Brady’s age and the team’s status in question. The Buccaneers will try to change that tonight without Kwon Alexander and likely without Lavonte David and T.J. Ward as well.

In short, if they win they’re contenders, because if they win they’ll do something that’s been extremely rare since 2001: Defeat an angry Pats team. At the quarter point of their season, Tampa Bay is going to get a test of just how good they really are. 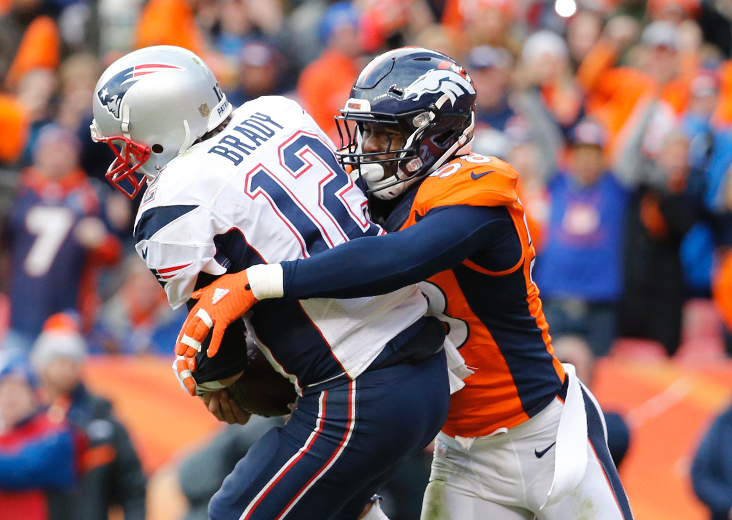 There is a formula for beating the New England Patriots, believe it or not. It’s a complicated formula that only certain teams can pull off, but it’s out there nevertheless.

Above all else, to beat the Patriots a team absolutely has to get in Tom Brady’s face. I cannot remember watching the Patriots under Bill Belichick and Tom Brady lose without their opponent having a solid pass rush. The best example of this would be the two Super Bowl losses to the New York Giants, but it’s also true in New England’s losses this season. Last week against Carolina, the offensive line did not hold and it gave the Panthers just enough of an opportunity to pull off the last second win. In the regular season, the Kansas City Chiefs have become very good at this as well, Bob Sutton’s defense relentlessly attacking Brady.

That’s the most important aspect of beating New England, but it’s not the only thing a team must do to pull it off. Vertical passing is important, as Belichick builds his defense for many things but speed is rarely one of them. The Patriots this year in particular are a little sluggish defensively.

For the Buccaneers, this all means putting together the most complete game they’ve had all season. It means putting more pressure on Brady than they were able to put on Mike Glennon, connecting on that deep ball to Desean Jackson that Jameis Winston has a habit of overthrowing.  When talking about Jackson, the Buccaneers’ quarterback said “I’m patiently waiting. I’m definitely looking forward to the next opportunity I have to get him the ball downfield because that’s going to be special.” Getting a big day out of the returning Doug Martin will also be key.  Controlling the clock will loom large, in particular making sure not to give Brady the ball with a chance to tie or win the game on his last drive. The Buccaneers also need to avoid getting too wrapped up in Rob Gronkowski.

Gronk might be football personified, and he’s certainly a dangerous receiver, but taking him out of the game rarely if ever actually helps a team beat New England. Remember, the Patriots won a Super Bowl with Gronk injured. Yes, the Buccaneers would do well to make sure he’s never covered by a linebacker, because even Derrick Brooks would have had some trouble handling that assignment. That’s the extent of game-planning they should do to plan for him.

For the Bucs, the bigger problem is going to be Brandin Cooks. Remember him from the Saints? The Patriots made a smart trade to pick him up this offseason, and that’s going to be a tall order for a Buccaneers defense that is likely to be without safety T.J. Ward, listed as doubtful as of this morning. Expect the Patriots to try and go deep to Cooks a couple of times Thursday night. It will be a big test for Tampa Bay’s defensive backs to not let him get behind them.

The coaching staff will be pushed to its limit as well. To get a pass rush, Mike Smith is going to need to ask a lot of second string linebackers while hoping his defensive backs sufficiently shadow Cooks and Gronkowski. The Bucs will have to blitz on Thursday night, having struggled to get pressure on the quarterback just sending their four defensive linemen. Dirk Koetter, likewise, will have to deal with Belichick’s in-game adjustments, and he will certainly make plenty. The Patriots will find something in the Buccaneers’ defense, and something on the offense, that they can use to change the game. Koetter and Smith are going to need to hold on when that happens. After a fourth quarter last week where both made just enough tweaks to put the Buccaneers over the top, it’ll be another test along the sidelines.

Smith put together game plans against the Patriots before in Atlanta and Jacksonville.  He knows what he’s in for.  “We will find out real early [with] who and how they think they are going to attack us. Then we have to try to make adjustments and it’s a game of adjustments.”

Some advice for how to deal with Patriots fans in a moderately friendly way while still being a football fan:

-Gently remind those wearing blue in your section that the Buccaneers just won a close game against an Eli Manning-led Giants team that involved several fourth quarter lead changes. Offer advice if they would like any.

-Feel free to thank Patriots fans for the Adam Vinatieri Game, also known as the Tuck Rule Game. Had the Raiders won and potentially gone on to a Super Bowl, it’s unlikely they would have traded Jon Gruden at any price. You can also thank Pats fans for their team letting Vinatieri walk so he could go to the Colts and help get Tony Dungy his ring.

-Mention that you enjoyed David Price while he was here. Watch them lose their minds.

-Describe an athlete. A guy generally considered especially photogenic, who always says the right things in press conferences, leads a glamorous but private lifestyle off the field, gets praise on the field for “intangibles” and “leadership” more often than their considerable skill, and has outlasted potentially more physically gifted people at the same position while winning five rings. Then turn to the Pats fan in question and ask them: Did I just describe Tom Brady, or Derek Jeter? 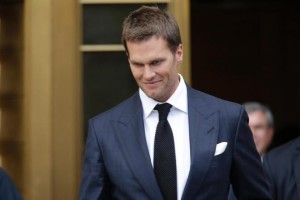 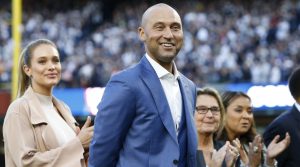 -For a fun “debate” you can always pit Bucco Bruce against Pat Patriot. If there’s one thing these fanbases have in common, it’s that they’re angrier than anybody else over the NFL’s helmet rules and how those helmet rules prevent throwback uniforms.

-To add more common ground, you can both toast Jeff Vinik, as the Lightning owner is also part of the group that owns the Boston Red Sox.

-If you must make fun of a Boston nickname, don’t make fun of “Beantown” because nobody there uses it. “The Hub of the Universe,” however, is just asking to be made fun of. Yes, people actually call it that.

Likewise, a few helpful hints for visiting Patriots fans, care of someone who just moved down here from Boston a couple of weeks ago:

-If you’re planning to tailgate and listen to the Red Sox game while getting ready for the Patriots, know now that you’ll be doing so in the shadow of the Yankees’ spring training facility, and that logo is all over the place in the Raymond James Stadium area. I just want to make sure you’ve been warned about that.

-Do not make fun of Florida Man, examples of whom sometimes support the Buccaneers. Especially avoid this behavior if you brought any townies with you. You know, the guys in backward green Red Sox hats that call everybody kehd. If you don’t think that guy is every bit on par with Florida Man, I have some wicked sad news for you.

-Don’t seek out some Boston-themed bar before the game. There are a few, you’d find one if you looked, but why? Get some local food (like a real Cuban Sandwich, not that weird panini version on the wrong bread that every restaurant in Boston has), enjoy a local beer if that’s your thing. You’ll be back home next week.

The Buccaneers win tonight if: They get in Tom Brady’s face, Winston and Jackson finally connect on one of those deep balls, Doug Martin is Doug Martin again, and they don’t let Cooks get behind them.

The Patriots win tonight if: The Buccaneers fail to do any of the things above. 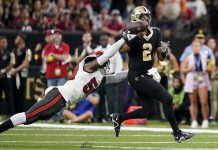 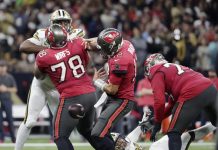 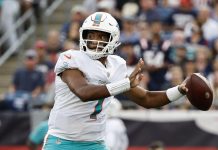 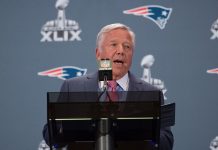 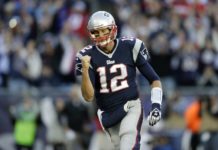 Brady bids football adieu, thanks the Buccaneers, the NFL, many players — except Patriots