On the final drive to tie the game, Tom Brady misread coverage and threw an interception on a seam route intended for Receiver Cameron Brate. Brady said it was “a bad read, bad decision.”  Brate added, “unfortunately for us it was a crucial play and ended the game.”

Earlier in the night Brady threw an interception on an intended pass to Chris Godwin.  Head Coach Bruce Arians explained that Brady got hit and when he stepped up to throw to Godwin, “he just didn’t get enough under it.”  That interception led to a 37-yard touchdown drive by the Rams.

Offensively, the Buccaneers have struggled with the deep ball after having success earlier in the season.  Asked in postgame why this seems to be the case, Brady did not have any clear answers and said he needs to review the film.  He responded, “we’ve had some changes and the receivers are doing a great job, I need to get them the ball.”

Throughout the season, the Bucs have failed against some of the better NFC opponents.  They lost twice to the New Orleans Saints, and now against the Los Angeles Rams in Week 11.  According to Arians, the Bucs are “still trying to figure that out, at times we look really, really good and then there are times when we obviously don’t.”

It’s certainly not for a lack of talent. As Brate points out, “we’re an offense that should click every single week like we did last week; that’s the goal, to score every time we have the ball.”

He acknowledged, “it shouldn’t come down to the last drive and we’re going to have to figure out why that’s happening against some of these better defenses.”

This loss also pushes the Buccaneers further behind the Saints for playoff contention.  New Orleans, the current division leader, secured a win against the Atlanta Falcons on Sunday despite missing their starting Quarterback Drew Brees.

On Monday night, the Bucs defense got beat by a Rams’ offense of short passes and screens, but there were also several missed tackles on receivers.  Safety Jordan Whitehead said, “it’s one thing if the receiver catches the ball on you, but another thing is that you better get him down.”  He claimed, “yards after contact is something we take pride in in the [defensive back] room and I know we missed a lot of tackles out there tonight, something we have to clean up.”

Unfortunately, football is a team sport and individual success isn’t enough to get it done.  Arians said, “we made some plays, obviously we didn’t make enough in this ball game, offensive, defensive, or special teams to win.”

At the end of the game, both teams had close to the same number of total plays, the same relative efficiency on third-down conversions, and both suffered two turnovers on offense.  It was just one field goal that separated them and gave the win to the Rams.

The biggest discrepancy came in the total offensive yards where Rams completed 413 yards and the Bucs only 251.  The Bucs couldn’t sustain drives or get first downs, particularly in the second half.  The overall sentiment from the team after this loss was frustration and disappointment.

Coach Arians said, “we know where we stand, and next game is even bigger.”  The Buccaneers play the reigning Superbowl champions, Kansas City Chiefs (9-1) on Sunday at 4:25pm. 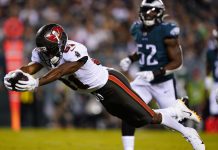 Brady’s win over Miami earned him NFC Offensive Player of The Week.