Virginia will be granting sports betting licenses starting this week and there is an interesting wrinkle in allotting the licenses. Virginia will have, according to reports, at least four venues and that number could grow to 12. The sportsbooks will be at casinos, horse racing tracks and at sports venues. Virginia does not have any major league teams although there are minor league baseball and hockey teams that play in the commonwealth. But Virginia business and political leaders have flirted with sports owners for decades about building a major league baseball stadium or a football facility across the Potomac River from Washington, D. C. It so happens that the owner of the National Football League Washington franchise Daniel Snyder is looking for a new stadium for his business and the possibility of establishing a sportsbook inside a Virginia football stadium would be of interest to him or any NFL owner.

On Election Day, November 3rd, Maryland voters will head to the polls and decide if the state should have legalized sports betting. Snyder’s NFL business is located in Landover, Maryland. A Maryland yes vote to sportsbooks within the state and the possibility of getting a sports betting operation up and going in his present facility might have Snyder thinking Maryland is not a bad place to do business either and maybe I can get a bidding war for my business between the two states and let’s throw in the District. Washington, DC has allowed the National Basketball Association Wizards and the National Hockey League’s Capitals owner Ted Leonsis to operate a sportsbook in the city’s arena. Snyder was working on getting a new Maryland stadium in 2018 but a land swap deal which would have allowed Snyder to build a stadium on Maryland land fell through. Snyder wants his new stadium opened by 2027. 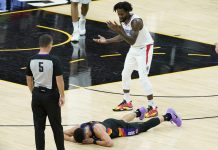