Will Super Bowl 51 Be The Greatest Of All?

The Super Bowl is always going to be hyped and looked forward to. But some games create more chatter. There are many reasons for this. Cities, fan bases, and personalities are the most common reasons why more people watch a game and talk about an upcoming game. Another reason is a reason fans get pumped: a great quarterback match-up. Super Bowl 51 will feature one of the best ever, but where does it rank? 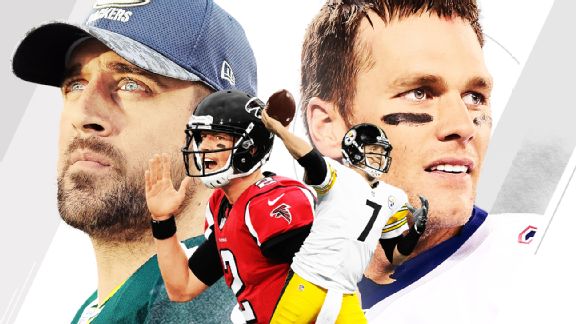 Tom Brady was just a puppy against Kurt Warner who was in his 3rd year terrorizing the NFL with the Greatest Show on Turf. Looking back now is even better, but the more pressing quarterback conversation at the time concerned Tom Brady’s injury and whether or not the guy he replaced, Drew Bledsoe, should start the game after leading the Pats to an AFC title game win in Pittsburgh.

It was supposed to be MVP Tom Brady against Matt Ryan and the Falcons. Wow, that’s weird, right? The two best teams got knocked out though, and it was Aaron Rodgers running through the playoffs (a prelude to a MVP year for him in 2011) taking on the Steelers. Roethlisberger had missed 4 games that year, and only had 17 TD passes. He had a couple rings, and much of the conversation revolved around him winning a 3rd title in 6 seasons.

The Cardinals were on a magic carpet ride to their first Super Bowl, but we knew all about Kurt Warner who had done this once before out of nowhere. He also had a couple MVP’s under his belt and a title. Big Ben was in his second game at this point and already a champion.

Take your pick in only Super Bowl rematch ever from the year previous. I’d lean toward the 2nd game only because both teams were favorites to get back for the rematch, and Aikman was more established as a star. Kelly lost his 3rd and 4th games, but in the rematch the hope was that he’d be healthy as opposed to the first game where he was knocked out early with an injury.

Most would think Elway-Montana. Yes, those are two of the best ever. But I leave it off the list in favor of this game. Why? Elway had failed a couple of times and Montana was a 3-time champion and the reigning MVP when they met the following year, so it was more about the 49ers dynasty and how bad the Broncos might get beat (and it was bad 55-10). But for SB 23, Boomer was the NFL MVP in 1988, and Montana was a 2-time champion. Cincinnati had the league’s most prolific offense, but amazingly the 49ers only allowed 1 TD in three postseason games, and stole the show. Well, until Montana delivered late.

Colts QB Bert Jones was the MVP, but Stabler and Tarkenton had won the award the two seasons previous. This game also matched up 2 of the top 4 passers on the two best teams in the league that season. It was Tarkenton’s 4th Super Bowl trip in 8 seasons.

Manning was the MVP for the 4th time and Brees had the highest completion percentage ever (broken this year by Bradford). The Saints started the year 13-0 and the Colts did them one better going 14-0. Plenty of hype and excitement, and then throw in Peyton playing against his dad’s team, the Saints.

Dawson was the AFL’s all-time leading passer leading his team up against the mighty NFL and the Packers led by NFL MVP Bart Starr (9-1 postseason record). Green Bay had won 4 of 6 NFL titles going into that game, and obviously was curiosity if the AFL could match up.

Favre had just won his 3rd straight MVP and was going for a second consecutive Super Bowl against Elway who despite the poor numbers in the game that Terrell Davis carried them in, he did throw for 27 TD’s during the year, good for 4th and the 6th most yards that year.

This game matched up the AFC and NFC passing leaders. Bradshaw was named league MVP that year after guiding the Steelers to the best record in the league. Many thought Staubach however to be the best quarterback in the game. Each team and quarterback entered with 2 Super Bowl wins, and this was a rematch from SB10 adding even more drama, and the crown of team of the 70’s was considered on the line.

Montana had won a ring at this point and was going up against Marino, who in his second season put together statistically the best year a quarterback ever had (48 TD, over 5000 yards).  They were the #1 and #2 passers in the league that season, and the two best teams. The world thought this could be the first of many future championship clashes, and that hype is why it was the greatest Super Bowl QB match-up ever.