The NFL liked Indianapolis for a number of reasons including a cluster of hotels near the stadium where the combine takes place. The NFL’s travel party includes 32 teams, league officials and, of course, the more than 300 players who audition for scouts. But Indianapolis is not a glamour city like Los Angeles or Las Vegas. Both areas have new stadiums which would be available in late February and early March annually although an LA based combine would be in Inglewood and hotel rooms would not be nearby. Money will play into the equation. The best financial deal will get the talent competition. 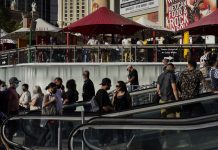