The Senators ownership might be able to build an arena in Ottawa.

It is back to a parcel of property called the LeBreton Flats for the Ottawa Senators ownership and the chance to build an arena on the property. This could be the second opportunity for the Melnyk family-owned National Hockey League franchise to attempt to build a venue on the Ottawa parcel of land. The National Capital Commission has signed a deal with Senators ownership that would see a new arena and mixed-use development built on the property. But there is a long way to go before any of that happens.  Senators ownership is partnering with former New York Mets owner Fred Wilpon’s Sterling Project Development, Populous, Tipping Point Sports and music promoter Live Nation in this attempt to build the arena. The present-day Ottawa Senators founder Bruce Firestone said he wanted to build a home for the NHL team at LeBreton Flats 30 years ago, but was told by the head of the National Capital Commission that it would never happen. But this time the National Capital Commission has named the Senators ownership as the preferred bidder to build a major attraction.

In 2018, Senators owner the late Eugene Melnyk was going to partner with developer John Ruddy to develop the LeBreton Flats site which would have included an arena-village. By November of that year, Melnyk was suing Ruddy for $700 million Canadian claiming that Ruddy had a conflict of interest because he was involved in another Ottawa development near the LeBreton Flats area. Ruddy decided to sue Melnyk for a billion dollars Canadian accusing Melnyk and the Senators business of skipping out on financial responsibilities and wanting not to pay rent in the planned building. The lawsuit seems to be inactive or in a holding pattern. Melnyk died in March and wished for the franchise to stay in his family for “generations.” 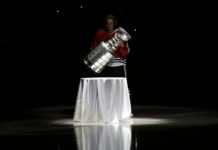 Melnyk Wants To Keep The Senators In The Ottawa Area