Caps in a position to finally get past Pittsburgh

The Washington Capitals are playing the Pittsburgh Penguins in their franchise’s most important game tonight. Yes, a team that has won the President’s Trophy three times this decade, features the best goal scorer of the generation, and has played in a Stanley Cup Final before is playing their most important game in franchise history in the second round.

The Capitals entered the series against the Penguins with every member of the NHL outside of DC, and even many bitter Caps fans, expecting Washington to find a creative way to lose. It’s the story of their franchise. The Penguins and Capitals have faced each other ten times in the playoffs, and Pittsburgh has won nine of those series. The only Capitals win was in the first round of 1994.

Even beyond the Penguins, the playoffs have not been kind to Washington. The Capitals have only reached the Conference finals twice. In 1990, they were swept by Ray Bourque and the Boston Bruins. In 1998, they topped Dominik Hasek and the Buffalo Sabers for their first trip to the Stanley Cup Finals, only to get swept by the Detroit Red Wings. The Capitals have not been that deep in the playoffs since.

The current generation of Capitals has been the most disappointing. Alex Ovechkin has won three Hart Trophies, led the league in goals scored seven times, and is the fourth fastest player to score 600 career goals. He has more goals than Mats Sundin, Mike Modano, Mike Bossy, and Joe Nieuwendyk, among others. And he has not lacked help. Brayden Holtby is a Vezina Trophy winning goalie. Nicklas Backstrom is the franchise’s all-time assists leader. TJ Oshie is an Olympian. Evgeni Kuznetsov is a potent scorer. Dimitri Orlov and Matt Niskanen are quality NHL defensemen. The Capitals have the talent to win in the playoffs.

Yet for years, the Capitals have been unable to pass the second round of the playoffs. The Rangers, Lightning, Canadiens, and Penguins have all stopped the Capitals’ Cup pursuit before reaching the Conference finals just this decade.

Tonight, the Washington Capitals lead the Pittsburgh Penguins in Pittsburgh three games to two, and have a chance to exorcise some demons. The Capitals can knock out the two time defending Stanley Cup Champions. They can do it in Pittsburgh, their personal house of horrors. They can send Sidney Crosby to the golf course. For Alex Ovechkin, Crosby’s main competition for the crown of the NHL’s best, and Capitals fan, that is a tantalizing opportunity.

Yes there will be a game seven if Pittsburgh wins on home ice. Yes the Capitals will host that game. No, they will not be the favorites. Washington has been down the road of playing Pittsburgh in elimination games, and playing game sevens on home ice against Crosby. It has not ended well. Their best chance to move beyond the choking title is to win in Pittsburgh tonight. If they do, it is a grand accomplishment for one of the NHL’s best players and a departure from past playoff failures. If they fail, Capitals fans will watch game seven at the Verizon Center expecting a bad bounce to doom their team against the Penguins, as is tradition.

Washington has a golden opportunity to expunge the awful taste of recent failures from their mouth. It’s a tough task ahead: to beat the defending Stanley Cup Champion Pittsburgh Penguins in PPG Paints Arena. But the Caps will never get a better chance than this. Tonight is the biggest game in Capitals history. Washington fans can only hope they play like it is. 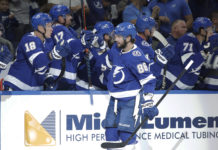