Gordie Howe played with the WHA Houston Aeros in the 1970s.

Tilman Fertitta wants to bring an NHL franchise to Houston and he has the ways and means to do so. He owns the NBA’s Houston Rockets has the keys to the Rockets arena and has talked to NHL Commissioner Gary Bettman about his thinking. That is a far different world from the days of when Leslie Alexander’s ownership of the Rockets and arena lease. The NHL entertained bids from three Houston backers including Alexander in 1997 for an expansion franchise. Houston was rejected. In 1998, Alexander tried to buy the Edmonton Oilers but Bettman found dozens of local Edmonton investors and the team was prevented from moving. Alexander wanted a new arena in the late 1990s and threatened to move his NBA, WNBA and Arena Football League teams out of town by 2003.

In 2000, a group of businessmen headed up by Ken Lay, the Chairman of Enron, pushed for an arena vote. Houston voters said yes for an arena and the city gave Alexander a sweetheart lease. In 1997, Robert McNair was interested in teaming with minor league hockey owner Chuck Watson to bring the NHL to Houston. The NHL would pass on Houston. McNair would end up getting a National Football League expansion franchise in 1999, the Houston Texans.  Alexander did not get along well with Watson and Watson helped lead the charge against a 1999 arena referendum which Houston voters rejected 54 to 46 percent. Houston has been forgotten by the NHL because of Alexander and his refusal to share the building. According to the lease with Houston, Alexander should have gotten the first shot at an NHL team playing in the Houston building. Houston elected officials wrote a bad lease agreement with Alexander perhaps not understanding how sports operates. Alexander is now gone, Fertitta is in charge and seems to be willing to work with the NHL to bring a team to the city. 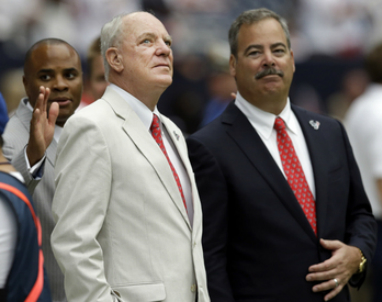 Houston Texans owner Robert McNair was interested in an NHL expansion franchise in 1997.