How do the leagues and players proceed?

April 20th, for some reason, is a significant day to marijuana users. It is “Weed Day”. Apparently, the origins go back to the 1970s. The medical marijuana bill that was passed in California was known as SB 420. How the numbers 4 and 2 along with 0 became a code for marijuana as in 420 friendly is shrouded in deep mystery. But how sports leagues and players’ unions handle their marijuana policies in the future is a question because pot usage slowing is being decriminalized. The NFL suspends players for testing positive for pot despite the fact that players perform in five states that have legalized pot, California, Colorado, Massachusetts, Michigan and Washington. Smoking pot is also legal in Nevada which will get Mark Davis’ Raiders in 2020.  Major League Baseball fines players and players could end up in a drug treatment program. The same holds true for NBA players. The NHL seemingly is fine with marijuana. Major League Soccer seems to look at pot possession in a case by case basis. The UFC is in line with the government supported World Anti-Doping Agency and will suspend an athlete for a year if caught smoking pot.

The American and Canadian cultures are changing. A number of states, some of them with professional teams, are considering legalization of marijuana in the very near future.  On June 20, 2018, Canada became the second country to legalize marijuana for recreational use. On October 17 the legislation became law with Canada treating marijuana like alcohol in terms of limiting home production, distribution, consumption areas and sale times. Legalizing marijuana in a state by state or countrywide basis as in Canada will force the hand of sports leagues who will have to justify suspending players taking pot. 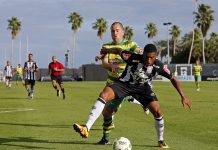 Voters In Albuquerque To Decide On Stadium Proposal

The “Sister City” Plan Continues To Be Developed