Lightning make their way back into the series

Washington, DC- The first and second games went as well as imaginable for the Washington Capitals. They outskated, outshot, and out checked the Tampa Bay Lightning to win both games in Amalie Arena. The Capitals took their 2-0 series lead back to the Nation’s Capital for the first Eastern Conference Finals game in DC since Dominik Hasek and Olaf Kolzig battled on June 2nd, 1998. The Lightning needed an answer to the surging Caps. And they found one in their headline players.

Washington controlled the pace of play in the first period, drawing oohs and ahs from their fans in Capital One Arena. They could not beat Andrei Vasilevskiy in the opening frame, however. The Caps outshot Tampa 14-10 and Vasilevskiy was perfect. Braden Holtby, on the otherhand, could not stop Stephen Stamkos or the Tampa Power Play. The Caps’ goalie created the man down when he tripped up Yanni Gourde. On the enduing power play, Victor Hedman and Brayden Point cycled the puck for Stamkos to get a clean shot. The Lightning Captain wired a puck through and gave Tampa a 1-0 lead 13:53 into the game.

With the lead, Tampa came out of intermission playing like their regular season selves, dominating in the neutral zone and capitalizing on mistakes. Lars Eller took a penalty for closing his hand on a puck. Sixteen seconds into the power play and 1:50 into the second period, Nikita Kucherov fired a one timer of his own past Holtby for a 2-0 lead. The onslaught continued. Kucherov found an open Victor Hedman for a shot from the left circle for his first goal of the playoffs. Tampa led 3-0 before the halfway mark of the game.

Washington did offer an answer. Just after the halfway point, the Capitals’ depth players got the team on the board. Chandler Stephenson gave Brett Connolly a pass to the left dot, where the 26 year old Campbell River, British Columbia, native wired a puck through Vasilevskiy to cut the lead to 3-1. Tampa again had an answer though, and quieted the fans late in the frame. With 3:57 left, Brayden Point controlled a pinballing puck in the left slot. He spun toward the net, and fired the puck through traffic by Holtby to put Tampa up 4-1 just before intermission.

The third period rotated between silence, disappointment, and excitement for Capitals fans. Tampa got their own dose of concern as well. Stamkos took a Braydon Coburn shot off his right leg, where he had a lateral tear of his meniscus last year. He limped to the bench. Ultimately, Stamkos returned and finished the game.

Stammer’s health was not the only concern for the Lightning in the third. Washington outshot Tampa 13-5 in the final frame, and mounted a late charge. With an extra attacker on, Evgeni Kuznetsov shot a puck from the left goal line extended. Even on the bad angle, Kuznetsov roofed the puck and cut the lead to 4-2. Washington got no closer. Vasilevskiy covered every other puck and time wound down on the Lightning’s 4-2 victory over the Washington Capitals.

The road team has won every game in the series so far. Lightning Head Coach Jon Cooper offered his perspective on home ice after the game: “Home ice advantage is Game Seven to me. If you’re gonna advance in the playoffs, you’ve got to win on the road. With home ice, you get four games where you get the last change. But ultimately it comes down to Game seven. I don’t think it matters where you play the other games’

Andrei Vasilevskiy played his best game of the series, saving 36 of 38 shots. The 38 shots were the most taken by the Capitals this postseason. Cooper explained the difference in his goalie’s peformances from the first two games to tonight.

“In our book, it’s still not ideal what we gave him tonight, but it was way better than Game one and two. I thought he was in a zone tonight right from the get-go. But I thought our team actually helped him out this time.”

Alexander Ovechkin took nine shots and Kuznetsov took 12, both more than the leading Tampa shooter, Kucherov, who only had six. Vasilevskiy made some of his most impressive saves on the top Washington gunners. Ovechkin was held without a point for the first time since game four against the Pittsburgh Penguins.

Washington leads the best-of-seven-series two games to one. Game four will be played on Thursday night at Capital One Arena. Puck drops at 8pm Eastern. 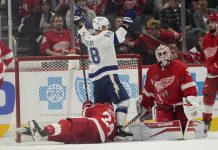