NYC FC is looking to build a stadium near Belmont Parl

Today is the day that New York State’s Empire State Development agency’s Requests For Proposals to develop some land near the Belmont Racetrack which straddles the New York City-Nassau County line is due. Two New York City area sports franchise owners may be submitting proposals, the National Hockey League’s New York Islanders and Major League Soccer’s NYC FC money people. New York State has a mission statement. The goal of this RFP is to strengthen Belmont as a premier destination for entertainment, sports, recreation, retail and hospitality on Long Island. Specifically to enhance Belmont Park to become one of Long Island’s premier destinations for entertainment, sports, hospitality and retail, with uses that are complementary to the existing Belmont Park racetrack.

NYC FC owners would prefer to build a soccer only facility somewhere within New York City borders and the NYC FC owners are looking at sites in the Bronx and in Queens. The Islanders ownership group has expressed some disappointment with the arrangement they have in Brooklyn and could be looking to sort of return to the team’s Long Island roots. Last December, the New York State Empire State Development Agency rejected all proposals that were submitted over a four year period to develop the property. Included in the no list was a New York Cosmos ownership proposal for a 25,000 seat stadium for the North American Soccer League team.  The Islanders franchise has always been about real estate.  Howard Millstein failed in 1997 to get a new Uniondale arena and Charles Wang struck out in 2010. Wang moved his team to Brooklyn. He sold the team to Jonathan Ledecky and Scott Malkin three years ago but Wang only gave up control a year ago.   The New York Islanders franchise has was created by the NHL to keep the upstart World Hockey Association out of the New York market in 1972. 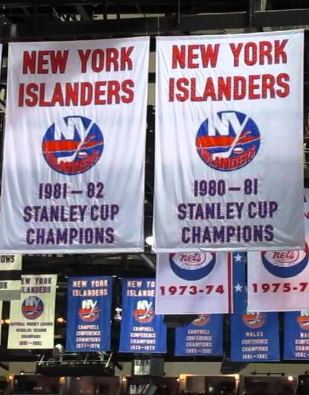 Could the Islanders owners move those banners to Belmont?