Sports Talk Florida – N
Listen Now WHBO AM 1040
Listen Now WWBA AM 820
Home NHL It Is Hurry Up And Wait Time For Seattle In Getting An...
Facebook
Twitter
Pinterest
WhatsApp

It is probably just a matter of weeks until Seattle gets the word that they are in the NHL beginning in 2020 or in slightly later. The National Hockey League could be involved with a collective bargaining agreement problem and there could be yet another lockout delaying Seattle’s first game. Until June, the likely Seattle ownership is in the hurry up and wait mode. They have well over 30,000 deposits requesting tickets for Seattle Totems or whatever name the owners want. They have an arena that is being renovated but there is little they can do at the moment. They cannot hire a general manager, a coaching staff and an array of scouts. They don’t have a team. But the NHL is so confident that Seattle will be in the league that expansion draft rules have been set up and it appears teams will start devising strategies to deal with player losses in the 2020 off season.

What Seattle does have is the three requirements to run a successful franchise. There is government support as evidenced with the rebuilding of the arena. Seattle has a good TV market and the NHL franchise, once Seattle gets the team, will have a pretty good financial TV deal. Seattle’s corporate market is growing and is pretty significant. The NHL team should get solid support from the big names in the market which include Microsoft, Starbucks, Amazon among others. There is a built-in rivalry with Vancouver which is about three hours north on I-5 from Seattle. The NHL will get a Pacific Northwest United States market, one the league wanted in the 1970s but that never materialized. The NHL awarded Seattle an expansion team for the 1976-77 season but there was a money issue and Seattle was forgotten. The NHL is waiting for the Stanley Cup Playoffs to end and then will make it official in June. Seattle is in. 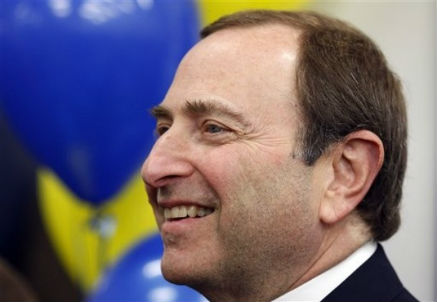 Gary Bettman has been pushing for a Seattle franchise for years.

The Arizona Coyotes Advance In The Arena Game Playoffs