Inside The Life Of The UND Goalie Coach

“I will always go back to that saying a friend of mine once told me. It’s that the puck doesn’t know what size you are,” University of North Dakota goalie coach Karl Goehring says when asked about playing goalie as a smaller goalie. Clad in workout clothes, Goehring took an opportunity to talk with Sports Talk Florida as his UND squad prepared for their morning skate. The rest of his team had already headed to the ice for their final skate before their national title game against the Quinnipiac Bobcats.

But how Goehring got to this point, being the goalie coach for a possible national title squad, began way back at his playing days with the Syracuse Crunch. That team may sound familiar to those who follow the Tampa Bay Lightning because it is the AHL affiliate.

While Goehring didn’t play under the Lightning regime, it wasn’t a Tampa affiliate at the time,  he has been a big part of the franchise’s history as he owns the records for most shutouts (11 tied for first) and also set the record for wins (78) and for most games played (176).

Goehring contributes his success with the Crunch to being able to play there for so long. Typically, in the AHL, players don’t get that luxury. They get moved around from organization to organization whether due to trade or the NHL club deciding to go in a different direction. The life of a minor league hockey player, especially a goalie, can be very tough at times. So for Goehring to have the success that he did is impressive. Of course being as humble as he is sincere, Goehring says  a lot of it comes from the franchise itself. 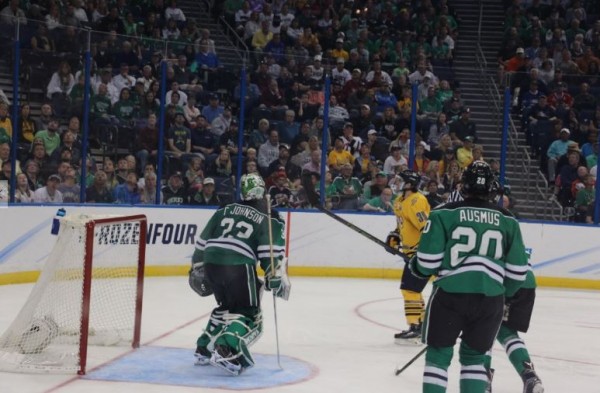 “Guys bounce around quite a bit,” he elaborated. “I guess I was lucky enough to play a number of seasons with a good franchise. You know,again, I just enjoyed my time there and am thankful for my opportunities. I still stay in touch with a bunch of folks back there.”

It’s not hard to see that Goehring isn’t one of the tallest guys that one would see at a hockey rink.

He stands at 5’8 so he isn’t like a Ben Bishop or what an NHL GM would scout for in today’s modern goalie. In today’s NHL, a goalie’s height matters a lot. However, for someone who may not have had the height advantage that others do, he was still pretty successful as a player.

“At the end of the day for me, it’s about stopping the pucks,” he explained. “You know for me [being smaller] was certainly motivation. I was told as a player that I was too small and so it was something where I went into games and seasons wanting to show that I can stop the puck.”

What brought this retired hockey player to coach one of college hockey’s strongest programs as a volunteer? For starters, Goehring used to play for UND back in the early 2000s. He led them to their last championship back in 2000.

If you ask him, it’s about his passion for the game.

“I’ve just always had a passion for hockey, especially goaltending in particular. It’s kind of a different language I like to say,” he says. “Although most head coaches are great and care, it’s nice to have someone who has played the position [to be there for the players.] I like to be out there and that’s why I do it.” 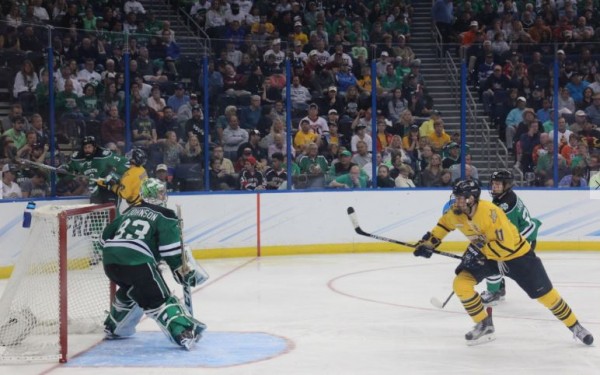 We chatted about a lot of things and it was interesting to pick a collegiate hockey goalie coach’s brain on the NHL’s latest trend of going with “bigger is better” when it comes to goaltenders. As more and more goalies get drafted, height is definitely a contributing factor like for a Bishop or for a Henrik Lundqvist.

The smallest goalie, Jhonas Enroth, may be the last sub-6 ft goalie that will play in the league. But for Goerhing, it’s not the size that necessarily matters when it comes to hockey–even at the NHL level.

“We’ll see how things go here NHL-wise, I know they are talking about tweaking the goalie equipment again,” Goehring said. “I always look for athleticism in goaltenders. If guys are athletes, quick, have good vision and can track pucks those are the big things for me. If they can do that with size too they are going to fill more net.”

But there are some things that the NHL is doing that still pique the interest of Goehring as it would for any retired goalie. The debate on decreasing the size of the goaltender’s equipment will affect how Goehring will have to coach his players who want to make it to the NHL, it’s also something that may be a safety concern.

“Again from a goaltender’s perspective we want to be safe. If you look at the forwards’ sticks it’s a bit crazy how light they are compared to when I was playing. It’s pretty crazy what guys can do in terms of shooting the puck,” Goehring said. “My opinion is what’s best for the game and what’s going to keep goalies safe too.” 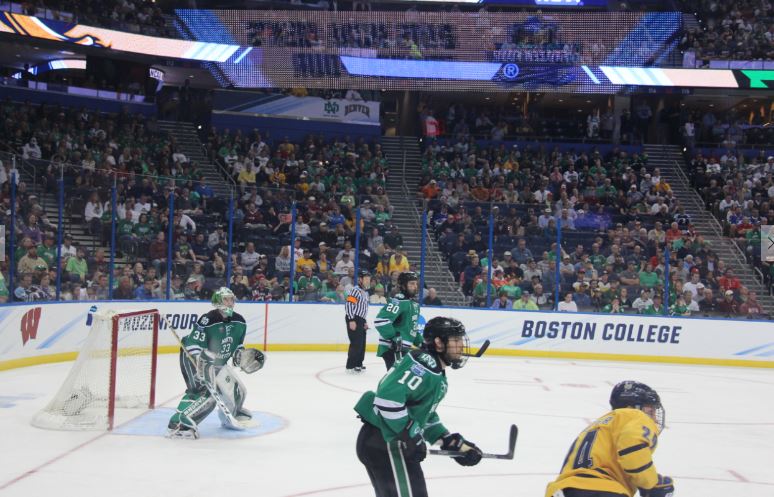 So what does a goalie coach look for when developing players?

Make no mistake, Goehring’s job is pretty important as a goalie can make or break a team. Just ask the Montreal Canadiens who lost Carey Price and nearly became a lottery team. When it comes to college hockey, there is a lot more meeting the eye than finding someone to wear some goalie gear for a college hockey season.

“The biggest thing is that it starts with recruiting. It’s identifying the guys that have the athleticism, have the mental makeup to push themselves to be better and to help our program.”

Of course after that, Goehring takes over and helps these players get to where they want to go in their game.

“For me ,when I work with them, it’s about helping them find their best game,” he said. “If there is technical changes, we want to make sure that they are on board with that. It’s really about helping them realize what makes them successful on the ice.”

But for him it’s not about equipment, size, technical changes or the myriad of other things a goalie coach has to deal with on a daily basis. Those things matter,of course, but what it’s about for him is helping these students develop their game, it’s why he does what he does.

“That’s what I really enjoy, is helping them get to know and understand their game.”

It seems to have worked out; The University of North Dakota beat the Quinnipiac Bobcats 5-1 to win the 2016 men’s hockey national championship. Starting goalie Cam Johnson only allowed three goals in both starts and had a .930 save percentage. Back in 2000, Goehring won a championship as a player, now he can add another championship to his resume–this time as a coach. 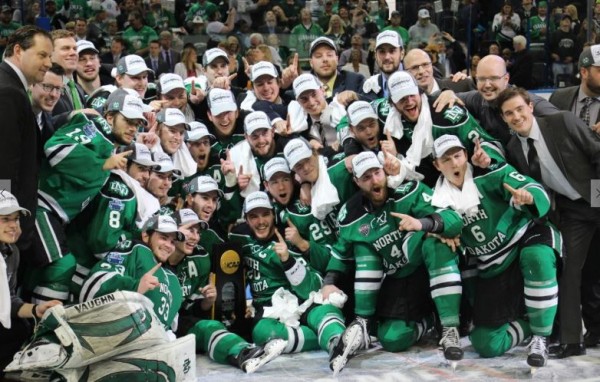