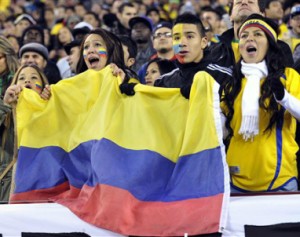 EAST RUTHERFORD, N.J. (AP) — Neymar scored in the 64th minute and then skied a penalty kick well over the crossbar in the 81st, leaving Brazil with a disappointing 1-1 draw against Colombia in an exhibition game Wednesday night.

The 20-year-old forward, who has emerged as Brazil’s star as it prepares to host the 2014 World Cup, offset Juan Guillermo Cuadrado’s 44th-minute goal for Colombia by using his quick feet to get around a defender. But then, after Pablo Armero pulled down Daniel Alves in the penalty area, Neymar had an embarrassing miss.

He took several steps to his left, then slowed in his approach and sent his penalty kick a good 15 yards over the crossbar and into the stands. Neymar’s tongue was hanging as he retreated to midfield.

A number of teams from the U.S.A. say they want to see the 2020 Summer Olympic Games to be postponed.