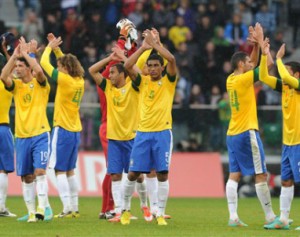 SAO PAULO (AP) — Kaka was picked for Brazil’s roster for next month’s exhibition game against Colombia at the Meadowlands along with Neymar.

Barcelona right back Daniel Alves, recovered from a left thigh injury, also was selected for the Nov. 14 match at MetLife Stadium — the 1,000th game in Brazil’s history.

Kaka, relegated to a reserve role at Real Madrid, returned to the national team last month for the first time since the 2010 World Cup.