The slow march to expansion.

It was widely assumed by those supposedly in the know that Major League Soccer owners were going to grant Sacramento and St. Louis league franchises by now. That has not yet happened. It appears that Sacramento and St. Louis investors are on track to land teams and the league seems to be intrigued by the Charlotte market because David Tepper, who owns the Charlotte-based National Football League Carolina Panthers franchise and is thought to be the richest person in the NFL ownership group, has made a pitch for an MLS team. Growing to 29 or 30 teams has not been an easy task for Commissioner Don Garber, his staff and MLS owners. The league originally set a goal of adding Sacramento and St. Louis to the league’s roster of teams by the league’s July 30, 2019 all-star game. But neither Sacramento nor St. Louis investors were able to pull together about $600 million in cash for a franchise. The MLS is charging $200 million a team and then each group needed money to build a stadium. Garber claims he has no worries about the investors getting the money together. It is not a problem.

The MLS ownership group decided to go from 24 franchises to 28 during a February 2017 owners meeting. Initially, the league had a hard time finding two cities let alone four. Eventually the MLS did get Cincinnati, Nashville and Austin into the lodge. Austin ended up getting Columbus’s owner Anthony Precourt after he decided to move his team to the Texas capital. A local Columbus group stepped in and got the team, Precourt took an expansion team in Austin. Sacramento and St. Louis failed in the first round of expansion. Investors from Indianapolis, Las Vegas, Phoenix, Raleigh and San Diego are also interested in landing an MLS franchise. The MLS’s planned expansion has been arduous. 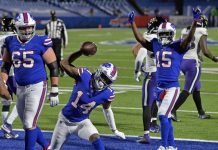