The MLS still isn’t sure of what it is.

If Major League Soccer Commissioner Don Garber is right, the MLS has a placed a ceiling on the amount of teams in the league. That number is 30. Presently there are 29 teams and assuming none of the owners of those franchises plan to pick up and leave their present location to go elsewhere, that leaves a number of potential owners in cities like Charlotte and Las Vegas having to really impress MLS owners. Getting to 29 teams though was a problem for MLS owners who decided in 2017 to expand by four markets. MLS owners struggled to get four suitable markets. Eventually politicians in Nashville and Cincinnati ponied up public money for stadiums. One owner Columbus’s Anthony Precourt moved his team to Austin when Columbus officials could not come up with money for a new stadium. But as what seemingly always happens in sports business, the MLS found the NFL’s Cleveland Browns owner Jimmy Haslam was interested in owning the Columbus franchise if he got public money for a new Columbus soccer stadium. A deal was worked out and Columbus retained the business and Precourt took and Austin, Texas expansion team. The league eventually got two more sets of willing owners and helpful politicians in St. Louis and Sacramento.

Garber thinks there will be more expansion eventually. “I think there will be a time when MLS is larger than 30 teams,” he said. “I don’t see that happening any time soon. We are adding a lot of teams. We’ve had a very systematic approach to expansion. We never wanted to expand too fast. We still think of the dark cloud of the NASL expanding too quickly and not wanting to get ourselves in a situation where we’re not thinking about things very strategically.” The MLS still needs to figure out where it stands in soccer globally. 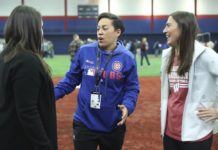