Mix Diskerud scored his first international goal in the third minute of injury time, giving the United States a 2-2 tie against Russia on Wednesday in an exhibition game at Krasnodar. 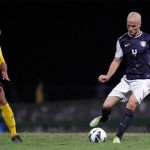 Michael Bradley, who scored in the 76th minute, sent a long ball into the penalty area toward Terrence Boyd, who was battling a defender. Diskerud, who had entered in the 87th minute, pounced on the rebound and bounced a right-footed shot in off a hand of goalkeeper Vladimir Gabulov.

The 22-year-old, whose mother is from Arizona and who grew up in Norway, was playing just his third game for the U.S.