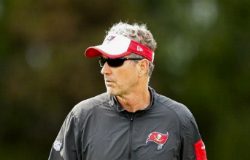 Bobby Dare - November 8, 2018
On today's show, Rock talks the latest from One Buc. Is Dirk Koetter's frustration starting to show? Is Jason Licht on the hot seat? Rock discusses the upcoming weekend of college football, the Gator's quarterback situation, MLB Hot Stove news, and much more!

Big Decisions Ahead for the Bucs – Rock Riley Show –...

Bobby Dare - November 6, 2018
On today's show, Rock discusses the Bucs' current situation. Should Jameis Winston take another snap as the Bucs QB? Is Dirk Koetter on the hot seat? Plus USF football talk, Floyd Mayweather news, and much more.
1234...8Page 3 of 8