The NFL Officiating Played A Big Role In The Rams –...

Sports Talk Florida - January 22, 2019
On Sunday, the league might have gotten enough errors to determine both teams that will play in the championship game in two weeks.

Bobby Dare - January 21, 2019
On today's show, Rock talks the NFL conference championship games. The Super Bowl is set. Was the blown call in the New Orleans game the worst you've seen? Should the NFL consider replay for penalties? Plus, Rock talks MMA, college hoops, and much more!

Rams Beat The Saints In OT: Game Marred By A “Blown...

Sports Talk Florida - January 21, 2019
For all the debate stirred by a blatant penalty that wasn’t called in the closing minutes of the NFC championship game, the Rams thoroughly earned their 26-23 overtime

Saints Start Slow But Rally Past The Eagles Setting Up A...

Sports Talk Florida - January 14, 2019
So when the Saints faced another fourth down on the Eagles 2 later that same drive, it only seemed fitting that they dialed up a touchdown pass from Drew Brees to rookie receiver Keith Kirkwood instead of settling for a field goal.

Eagles Hope To Find That Super Bowl Magic Against The Heavily...

Sports Talk Florida - January 13, 2019
Meanwhile, the Saints anticipate the Eagles to look for former Saints running Darren Sproles, who, like Foles, did not play in the previous meeting

Mark Davis’s Road To Las Vegas May Not Go Through Oakland...

Evan Weiner - December 15, 2018
The National Football League is not an independent spring-summer baseball league where teams come and go and on an odd occasion, a team could play an entire season of road games. 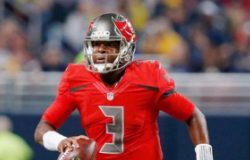 Bucs Fall Apart In Second Half

Bobby Dare - December 10, 2018
On today's show, Rock talks the Bucs loss to the Saints. Where do the Bucs go from here? Plus, Rock talks the "Miami Miracle," the Heisman, Clearwater's Keith Thurman Jr., Rays baseball, and much more!

Sports Talk Florida - December 10, 2018
"Goal No. 1 was to win the division again and we were able to do that," Drew Brees said Sunday after throwing for one touchdown and running for another to help the Saints rally from an 11-point halftime deficit to beat the Tampa Bay Buccaneers 28-14.

Is This A New Jameis Winston?

Bobby Dare - December 7, 2018
On today's show, Mike Nabors fills in for Rock Riley. Mike covers the New Orleans Saints, so he has lots of insight for this Sunday's matchup. Mike talks Brees and Winston comparison, the Bucs remaining schedule, the impending bad weather during the game, the Heisman trophy, Tampa Bay Rays talk, and much more!

Bobby Dare - December 5, 2018
On today's show, Rock talks USF as they look ahead to the Bad Boy Mowers Gasparilla Bowl. Plus, Rock talks the Bucs as they prepare to face the New Orleans Saints, the announcement of Tampa's XFL team, Alliance of American Football, and much more!
1234...6Page 3 of 6